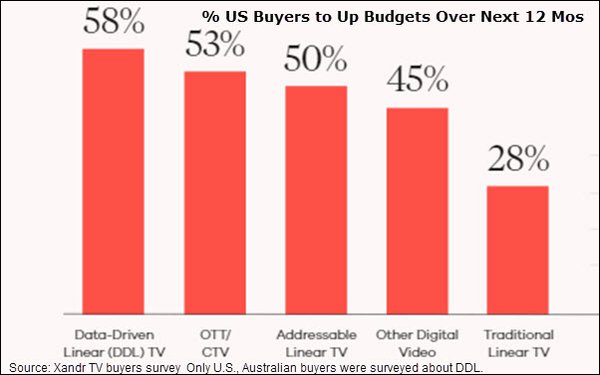 More than half (58%) of U.S. television buyers said they’re planning to increase their investments in data-driven linear television (DDL) over the next 12 months.

Xandr surveyed 357 agency and advertiser buyers in the U.S., Australia, U.K., France and Germany who are actively working in over-the-top (OTT), connected TV (CTV) or linear television for its 2021 State of Convergence and Advanced TV report.

Only the U.S. and Australian buyers (100 and 50 participants, respectively) were asked specifically about DDL.

Three out of four asked about DDL agreed that it “gives marketers the very best of TV and digital advertising, combining the scale of linear TV audiences from premium networks with the advanced targeting of digital data sets,” according to the report.

Most said they associate DDL — which shows households viewing the same TV show the same ads, but places ads based on advanced consumer data sets beyond age and gender, is another vital piece of premium video innovation — with top- and mid-funnel objectives, similar to linear TV.

Asked about the benefits of DDL when automated buying is employed, 43% of U.S. buyers cited the ability to define campaign parameters once and view a single proposal across media owners, including forecast audience impressions and deduplicated reach.

Given that the main source of DDL funding in the U.S. is from a general advertising bucket, a potential “vast” pool of dollars could be available, the report notes.

Xandr argues that the barriers to adoption of DDL cited by some buyers — unclear benefits and confusion about how it works —are “easily mitigated by partnerships with experts.”

Meanwhile CTV’s robust advertising growth continues, with 53% of U.S. buyers saying they’ll increase those investments in the next 12 months.

Still, only about half of OTT/CTV budgets across the regions are allocated to programmatic buys.

Respondents cited their focus on building and growing direct relationships with publishers, and the less familiar advertising process, as key challenges to programmatic.

“Perceived challenges, like limited scale or poor ROI, are viewed through the lens of pure reach and exposure, but convergence offers a more holistic approach to finding targeted scale among video audiences,” the report asserts.

Addressable linear TV also continuing its expansion, with 50% of buyers planning to increase ad investments over the next 12 months.

Traditional linear TV investment isn’t stalled, but a comparatively small 28% of these respondents plan to up this spend in those coming months.