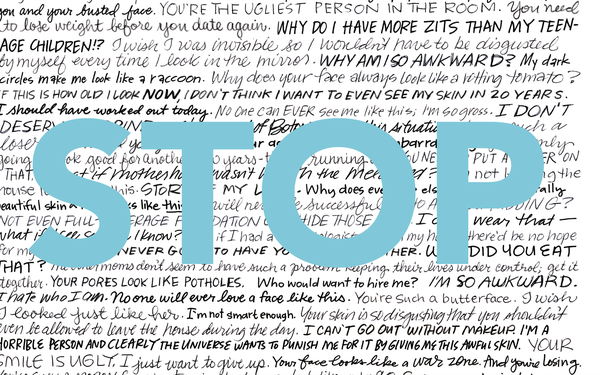 Tula wants to build people's skin confidence and stem the flood of nasty self-criticism so many struggle with. And while it certainly isn't the first beauty company to challenge women to speak more kindly to themselves, the D2C brand's new campaign uses consumer insights differently.

The #EmbraceYourSkin campaign is based on research revealing that its typical customer averages about 19 negative self-comments each day.

"We want to inspire confidence by changing those inner conversations, pushing the beauty industry forward," says Savannah Sachs, chief executive officer. "We want to do it in all our marketing,” with the company also “working to make social media more positive."

The TV ads show women delivering cruel comments to loved ones: a parent, a sister, a baby. And a print ad in the New York Times uses dozens of nasty remarks, taken verbatim from Tula’s research. "Your pores look like potholes" and "You shouldn't even be able to leave the house in the daylight" are just a few.

While the print component lends gravitas to the effort and the TV spot illustrates self-hate in an arresting way, Sachs tells D2C FYI that the real meat of the campaign is on social media, which is ground zero for so much angst.

Fewer than 1% of the respondents in the study say social media makes them feel more confident. And that research confirms other recent findings of the many ways social media fills people with self-doubt -- especially the young women in Tula's target demographic.

So the company is mobilizing empowering celebrities like actress Christina Milian and Olympic athlete Shawn Johnson, as well as 400 members of its influencer community on both Instagram and TikTok. The latter group includes LeendaDong, DexRated, Kendra Austin, and Mik Zazon.

Tula, founded by gastroenterologist Dr. Roshini Raj, uses topical probiotics in its products. Its skin-positivity messages are based on the idea that beauty comes from the inside out.

Sachs says the new effort builds on the company’s previous steps to help people feel better in their skin. Like a growing number of brands, for instance, it committed to no retouching of skin images in ads. And it's been offering a positive text affirmation service for weekly confidence boosts.

Still, Sachs acknowledges that being part of an industry built on telling women how flawed they are continues to be an enormous challenge.

So instead of labeling photos "Before" and "After," Tula uses "Beautiful before" and "Beautiful after." And instead of calling some products "anti-aging," it refers to the category as "ageless."

Besides asking its 1,500 influencers to post about their struggles with negativity, it's strengthened its guidelines, prohibiting the use of any filters in Tula content.

Tula products are available in stores incuding Ulta, locations within Target, and Nordstrom. Brick-and-mortar retail is its fast-growing channel. But Tula.com continues to be its largest channel, with some 50% of its business and an average customer age of 32. Millennials are more than 60% of its customer base.

"We also over-index with Gen Z, so as we think about platforms and meeting the community where they are, Instagram is critically important," says Sachs. "And TikTok is an incredible growth channel, especially for Gen Z.”

Sachs says its TikTok community has grown to more than 300,000.

More important than their age, Sachs says, is what makes Tula's customers tick. They're multitasking pet owners who love their cardio, "but it's all about balance. And they're looking to feel equally as beautiful with and without makeup."