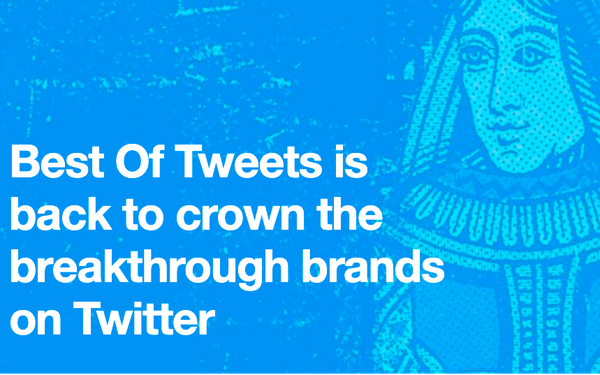 For brands that think they could be deemed “internet royalty,” Twitter’s “Best Of Tweets” competition is now open.

While there is no actual prize, it is a way for brands to gain public recognition for any meaningful Twitter campaigns they have created over the past year.

“Twitter’s Best Of Tweets is our hall of fame, our GOAT, our crowning achievement for the brands that creatively leveraged Twitter this year to launch something new, or to connect to what’s happening like no one else could,” writes Twitter.

To be nominated, brands must summarize their campaign in several sentences and explain simply why they should win.

While there is no word on how Twitter is planning to judge this year’s submissions, here are the categories that have been used in the past:

The #Live award recognizes campaigns that used Twitter best to connect with people live during significant events and moments, including television.

The #Creativity award recognizes the creativity and innovation that Twitter encourages on its platform.

The #Scale award celebrates campaigns that generated worldwide awareness and engagement, and those that had significant cultural impact.

The #Customer award celebrates businesses that were noteworthy in their use of Twitter for customer service and their achievement of outstanding results in customer experiences.

The #Growth award recognizes small businesses that used Twitter Ads in order to grow and expand.

Here are some notable categories, and winners, from last year:

“Best campaign for quenching our thirst for sports” (@Gatorade)

To qualify for the competition, brands must submit their application by Oct. 12.