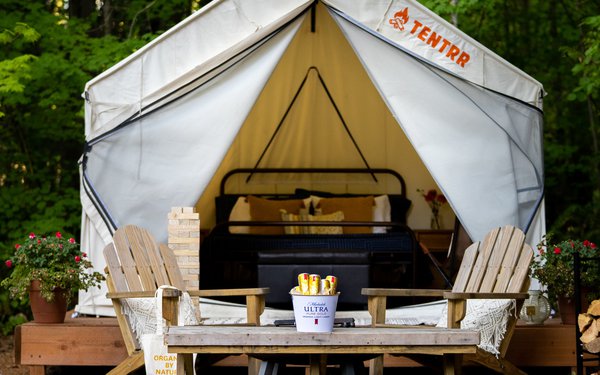 "This innovative partnership draws on the strengths of each company to provide the ultimate guest experience and deliver lasting memories in the great outdoors," said Todd King, vice president of marketing at Tentrr.

Apparently, those strengths of Michelob Ultra Pure Gold lie largely in the “Pure Golden Hour” marketing concept and the beer’s branded products, since actual beer -- aside from a $5 Go Puff delivery coupon -- isn’t included in the amenities of the new campsite experience. Instead, glampers get a specially branded tent, pillows, lanterns, hammock and other gear -- plus the chance to play branded games like Cornhole and giant Jenga.

Locations include a mountain retreat, an alpaca farm, a Joshua Tree National Park site in California, a mountaintop ranch site, and a retreat among the redwoods. All campsites also include the usual fully-equipped Tentrr goodies, including Adirondock chairs, fire pit, solar shower, propane heater, table, benches, and toilet with its own privacy tent.

Previous incarnations of Pure Golden Hour have included a meditation event for 2,000+ people at SXSW and a virtual live performance and merchandise line launch with Maluma.

In April, that singer also helped the three-year-old Michelob Ultra Pure Gold celebrate its transition to being brewed with 100% renewable electricity by releasing a song, "Rumba (Puro Oro Anthem)," said to be the first to actually feature the sounds of the sun.