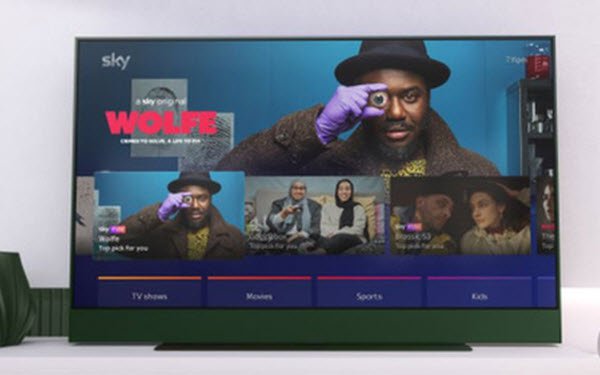 “It is the only TV in the world with Sky inside: No dish, no box, no fuss.”

“Just like a smartphone is more than a phone, Sky Glass is more than a TV,” providing “total integration of hardware, software and content,” Strong said.

Hype aside, the new, WiFi-driven smart TV does represent a significant advancement in simplicity that’s likely to increase retention among existing Sky subscribers, as well as attract new subscribers.

And although it integrates the apps for Netflix and Disney+ (with Peacock and Paramount+ coming), as well as aggregating content from Sky, iPlayer, ITV Hub, All4, Spotify, Peloton, PlayWorks and other sources, it’s also a direct hit on streaming-service competitors, as well as the dominant smart-TV brands.

The sets have 4K Ultra HD and Quantum Dot technology and 360° Dolby Atmos sound — and eliminate the need for a soundbar, as well as a satellite dish or set-top box (STB).

Users can create programming playlists across apps and channels — and across live and on-demand — with a single button.

Sky customers with £26-per-month Ultimate TV subscriptions can lease the TVs for extra monthly fees ranging from £13 ($17.71) to £21, depending on the set’s size. They can also be bought outright for between £649 (with an extra Sky subscription) and £1,049.

Sky Glass is also the world’s first certified-carbon-neutral TV, according to Sky — although some have noted that encouraging consumers to discard working TVs could create unnecessary waste.

Perhaps most crucial from a long-term competitive standpoint, Sky Glass was designed to be compatible with other telecom and subscription TV operators — in fact, Comcast already has IP distribution deals with “most every provider,” and is also licensing out the technology to Australia’s Foxtel Group, according to Strong.

Comcast CEO Brian Roberts described Sky Glass as an “offensive” rather than defensive move, noting that Comcast and Sky have been working on the technology for over a decade. (The hardware partner for Sky Glass has not been revealed.)

“All the wires are gone,” he said. “All the boxes are gone. You can talk to it. It tells you what you want to see. It shows it to you right away. You can switch from music to exercise to television to news.”

Although the reliability of streaming via broadband could prove challenging, Sky will lower its costs and increase its margins by eliminating satellite dishes, technology analyst Paolo Pescatore told BBC News.

“Providing your own TV set and persuading people to sign up for a subscription, that is extremely lucrative for Sky," he said.

The new device also opens opportunities for Sky to offer discounts on the TV to users of its broadband services, and dual- and triple-play bundles that include fast fiber and gigabit connectivity, Pescatore added to CNBC.

“The end of the TV set-top box is finally here,” he declared (sending chills down the spines of STB data-dependent services and marketers).

“It’s hard for rivals to compete head-on, given Sky’s dominance in TV and position as an aggregator of key streaming services,” Pescatore concluded.

Now, the industry will be waiting to see how Comcast will introduce new smart TVs in the U.S.

Protocol recently uncovered a Comcast product page (since taken down) that described plans for Comcast-branded “XClass” smart TVs made by Hisense and powered by the X1/Flex OS software that also powers Comcast’s STBs.

The sets would supposedly support all of the big U.S. streaming apps, with buyers offered a free year of Peacock’s Premium, $4.99-per-month service.

Since Comcast’s Xfinity video and broadband already get Peacock Premium at no additional charge, Comcast might be planning to sell the XClass sets to consumers who aren’t Comcast subscribers, as noted by NextTV’s Daniel Frankel.

With Amazon having just introduced its own-branded, Alexa-controlled TVs, it’s clearer than ever that the big players are intent on owning the hardware and avoiding difficult negotiations with dominant device makers like Roku.

They’re also having to work harder and harder to devise and implement strategies for covering all of the competitive bases without cannibalizing their existing revenue streams.