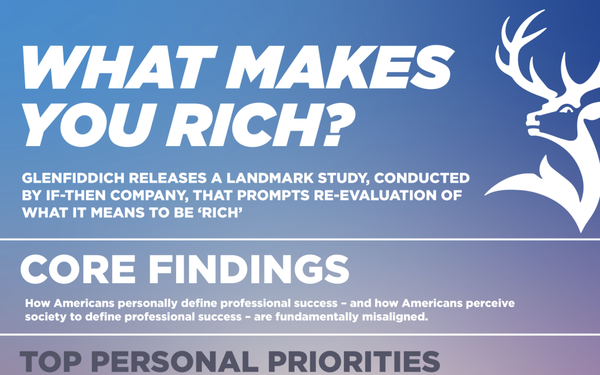 If you can afford an $18,000 bottle of Glenfiddich Single Malt Scotch Whisky, you’d probably be considered rich.

But Glenfiddich itself insists that being rich means much more than your personal monetary worth.

That’s the paradox next week as 15 of those $18,000 bottles go on sale Tuesday via the NFT (non-fungible tokens) platform BlockBar, a day before the brand’s deadline for nominations to its #Richest25 list, a project designed to “broaden the definition of wealth by reimagining its true meaning.”

Glenfiddich says the NFT sale, involving a 46-year-old whiskey that’s been finished for 21 years in an Armagnac cask, makes it the first luxury spirits brand available via NFT. BlockBar, meanwhile, says it's the first direct-to-consumer, fully authenticated wine and spirits platform via an NFT marketplace.

On the other hand, “Scotch whiskey, as a category, has long perpetuated wealth as the primary status symbol, which is a cycle we intend on breaking,” said Michael Giardina, brand marketing director for Glenfiddich, on announcing the #Richest25, developed in partnership with activist Brittany Packnett Cunningham. "Glenfiddich believes a full, rich life is also about family, community, values and fulfilling work,” Giardina noted.

Hence, the #Richest25, designed to “subvert ‘rich list’ traditions by honoring individuals who challenge the traditional idea of wealth.”

Twenty honorees have already been posted on the #Richest25 website, with the public invited to nominate another five by this Wednesday.

While Glenfiddich specifically contrasts its list with the Forbes 400 list of billionaires, released earlier this month, the Forbes 400 was in fact published “in partnership with Glenfiddich” -- and simultaneously with a paid Glenfiddich article on the #Richest25.

Glenfiddich emphasized that the #Richest25 represents just “the first action the brand is taking as part of a larger mission to reassess how we look at value, wealth and 'riches' through a societal and personal lens.”

Later this fall, for instance, the brand plans introduce a series of fashion collaborations that “reimagine antiquated symbols of wealth and status,’ with proceeds going to GoFundMe.org funds focused on entrepreneurial pursuits and innovation.