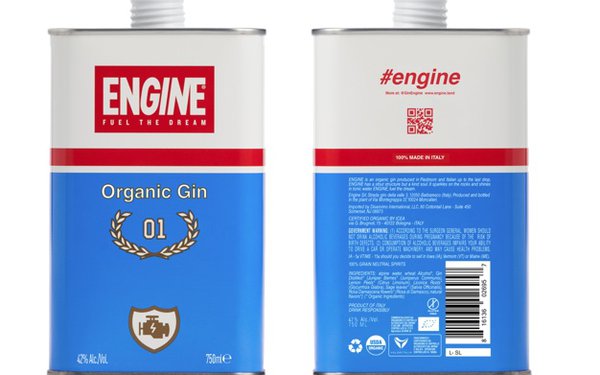 If you see a car enthusiast drinking from an oil can, you can only hope they’re partaking of Disaronno ‘s EnGINe Gin. The product, now being launched in the U.S., comes packaged not in a bottle but in a fake tin oil can hearkening back to the classic age of automobiles.

EnGINe Gin -- with a can that’s actually made of aluminum -- was created in Italy by Paolo Dalla Mora, whose background includes stints as chief marketing officer for Italian fashion house Moschino and as global communications officer for Disaronno’s parent company, Illva Saronno SpA. But Dalla Morra’s always had a passion for motorsports as well as for spirits, leading to the birth of Engine Gin two years ago.

Dalla Morra says the concept came about while he was working on his motorbike in his garage and drinking a cup Langa digestive, a traditional Italian remedy made with lemon peel and sage “to cure a sour mood…I thought it would be interesting to reproduce those very flavors in an alcoholic version.”

In addition to lemon and sage, EnGINe’s ingredients also include licorice root, damask rose and and juniper. The spirit is made in small lots in Langhe,nthe heart of Italy’s automobile industry, in a traditional copper John Dore pot still, with vacuum distillation using a rotary evaporator.

Last spring, ILLVA Saronno took a stake in Engine Gin, hence its launch in the U.S. Disaronno International is handling EnGINe’s marketing in the U.S., with Colangelo & Partners working with Disaronno on trade ads.

Dalla Mora told Marketing Daily that marketing efforts will include collaborating on content with lifestyle news publication Highsnobiety and organizing private parties in New York, Miami, Los Angeles and other cities with “the creative direction of influencers / ambassadors.”

The older Rossi is also featured in an Italian EnGINe commercial.

Extending its motorsports esthetic in another direction, the brand also hosts an online EnGINe Garage, which Della Mora described “as an incubator of art & design…with internationally renowned and emergent artists” sharing “their vision of the brand with their own tone of voice.” The artworks, he said, get “used afterwards in several touchpoints of EnGINe communication.”

The brand, priced at $29.99 per 750 ml can, will be available in both physical stores and online.