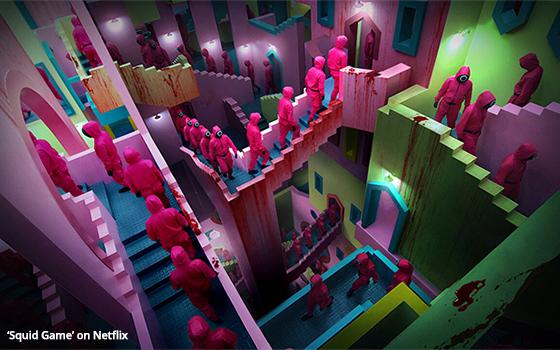 Looking past its content issues earlier in the year, driven by the COVID-19 pandemic, Netflix over-delivered in terms of added worldwide subscribers in the third quarter -- up 4.4 million -- now totaling 214 million paid global members, due to fresh TV content.

It had an estimated 3.5 million global subscriber additions.

In the U.S and Canada, there was negligible subscriber growth -- just 70,000 new subscribers, to now total 74.02 million.

Netflix expects stronger results in the final three months of 2021 -- typical for the big subscription video-on-demand service -- to 8.50 million new worldwide members, growing to 222 million. In the same year-ago period, it added a similar 8.51 million.

Netflix increased total marketing spending by 9% to $4.2 billion versus the third-quarter 2020.

The company says it has been seeing strong results for new programming/films in the second half of this year, now that the pandemic-related disruptions of program productions have lessened.

For its big “Squid Game” release, there were 142 million worldwide accounts who watched some of the series in its first four weeks -- its biggest release ever.

In the future, Netflix says it will shift results of its TV programs/movies to a “hours viewed” basis. It had been disclosing just “accounts” viewing for TV shows/movies, as well as “starts” and completions of programming.

Netflix says in its shareholder letter that the change “is a slightly better indicator of overall success of our title, and member satisfaction. It also matches how outside services measure TV viewing and gives proper credit to rewatching.”