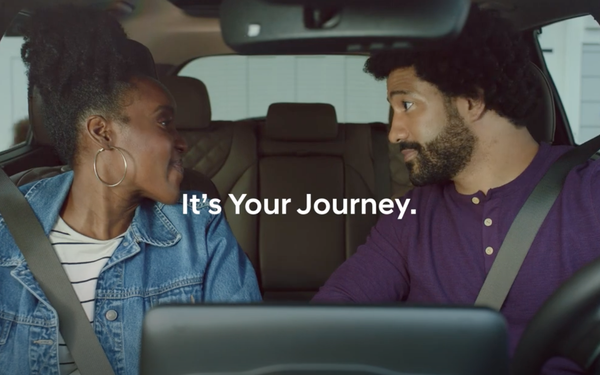 The automaker selected independent and minority- and female-owned Culture Brands as its first African American marketing agency of record in May.

The multiyear agreement with Culture Brands followed a competitive request for proposal process, per Hyundai.

"We worked with media partners to enhance the creative with custom content and influencer integration, from the African-American community," Zepeda tells Marketing Daily. "We continue to increase our focus and investment in Black-owned and Black targeted media platforms, adding new partners to the plan that we hadn’t previously worked with.

This is Hyundai's largest investment in a targeted African American campaign, she adds.

As important as the cultural insights were to the creative, they were also used as a tool for the media placement, says Erik Thomas, senior group manager, experiential and multicultural marketing, Hyundai Motor America.

The campaign aims to reintroduce Hyundai to the community as “a viable option for new vehicle prospects,” Thomas says in a release.

Diverse representation was important to the making of the campaign. Culture Brands, along with Brim & Brew, a Black-owned production company, ensured people of color were in front of and behind the camera.

Insights into the vehicle target were honed through research and real-time polls leveraged through Because of Them We Can.

“Okay is defined as a word that is used to express assent, agreement, or acceptance,” said Eunique Jones Gibson, chief executive officer and chief creative officer of Culture Brands, in a release. “In the African American community, placing ‘okay’ before something is the quintessential way things worth noticing are acknowledged. Together, it’s the perfect nod to Hyundai and to our prospective buyers.”