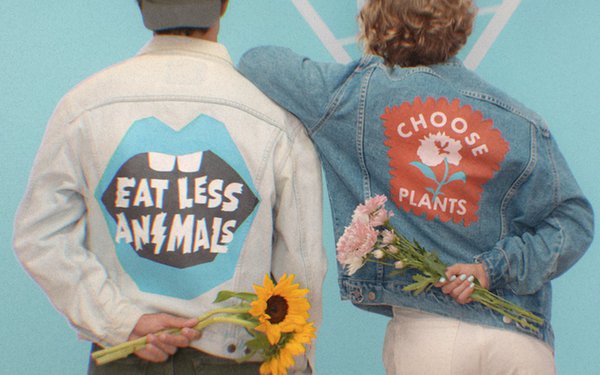 Oat-milk pioneer Oatly’s latest outreach to what it calls the sustainability minded, “post-milk generation” is an “upcycled” merchandise offering.

Dubbed ReRuns, it’s an experimental initiative in which people can purchase recycled T-shirts and denim jackets on the Oatly website that might otherwise end up in overseas landfills.

“Our fans love our branded merch, but new merch is like the last thing the planet needs,” Heidi Hackemer, Oatly North America executive creative director, tells Marketing Daily. “The goal? Put less junk into the world by experimenting with a more sustainable approach to merch.”

The garment offering consists of T-shirts emblazoned with one of five Oatly “power statements”—for example, “Eat Less Animals” and “Choose Plants”—plus a collection of limited-edition, artist-designed denim jackets that “promote the plant-based revolution.”

The company is partnering with about a dozen female artists like Minneapolis-based Lindsey Made This.

Oatly is also working with the online retailer Goodfair, which sources garments from textile recyclers.

According to Goodfair, thrift stores like Goodwill are only able to retail about 20% of the clothes donated to them.

“As an online thrift store with no physical location, we work directly with these textile recycling companies and other partners to purchase these amazing preloved clothes before they are exported—the majority of which end up in landfills overseas,” the Goodfair website states.

Five months ago, Oatly raised $1.4 billion in an initial public offering on the Nasdaq exchange.

One of the company’s biggest challenges has been producing enough of its products—which include ice cream and yogurt—to meet demand.

For example, Oatly debuted as a core menu offering and an exclusive oat milk at Starbucks last March and quickly sold out.

According to the company’s IPO filing, branded foodservice offerings is a key to generating awareness and trial.

“To enter new markets, we use a foodservice-led expansion strategy that builds awareness and presents a high-quality brand experience via the specialty coffee market and ultimately drives pull through retail channels,” the document states.

“There is a massive exploration happening here. A lot of people who care about sustainability still haven’t tested our products,” Oatly CEO Toni Petersson said in a recent interview with Bloomberg.