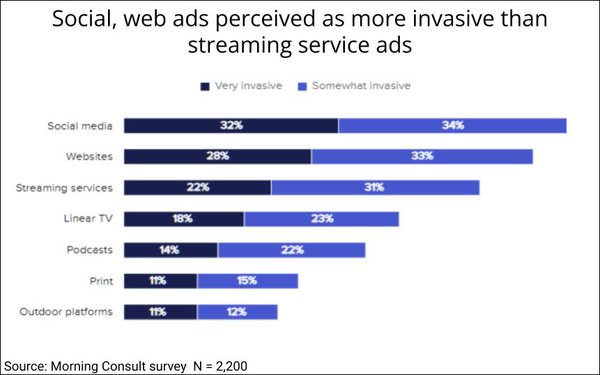 Much as advertisers appreciate the targeting capabilities of ads on streaming services, it’s no secret that there are still some serious kinks to be worked out when it comes to the user experience.

Just how bothersome are these problems?

Well, 44% of U.S. adults say there are too many ads, 69% say they’re repetitive, and 79% are bothered by those experiences, according to a survey conducted in September by Morning Consult.

The “too many” perception is fairly evenly held across age groups, although Gen Zs are somewhat more likely to voice that opinion: 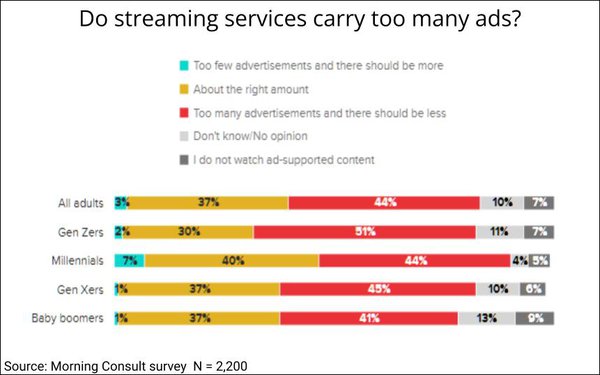 The “good” news: social media and website ads are perceived as even more invasive — at 66% and 61%, respectively. (See chart at top of page.)

Of course, consumers’ paradoxical attitudes about targeting are by now familiar, and the results of this survey are no different. 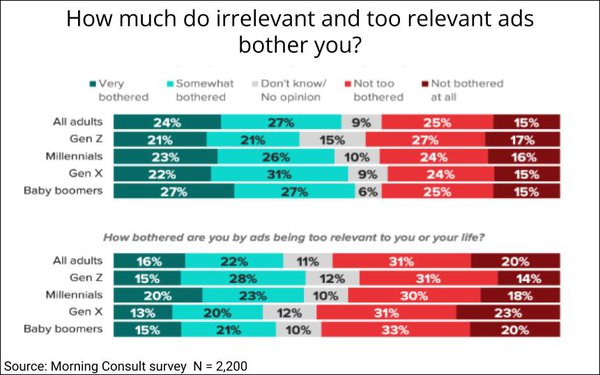 Further, while 64% find targeted ads in general to be invasive, and 52% find them “creepy,” 57% find them informative and 50% find them helpful: 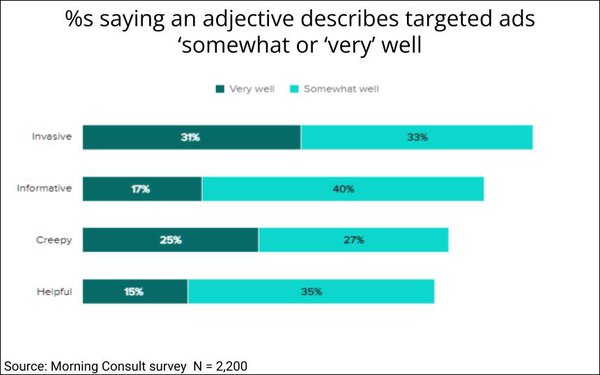 So how is the industry dealing with repetition and the seemingly contradictory perceptions about targeting, given the current lack of standardization in ad targeting and measurement across publishers, smart-TV makers and even ad-tech intermediaries?

As various industry pros noted to Morning Consult, frequency capping on specific ads, while imperfect, does help, as does using an ad-tech partner like The Trade Desk that allows advertisers to see ad frequencies across platforms when they’re being purchased through multiple media companies and other sources.

Vizio and some other smart-TV makers tout their ability to automatically control the frequency of ads viewed by users of their devices as a reason to make cross-service ad buys through them.

“Broadcasters need to do their part by allowing more trusted third-party monetization sources to compete so that viewers see a greater diversity of ads,” Michael Schwalb, data and advertising general manager for video software company JW Player, adds in a statement to Advanced TV Insider.

While this “might be a hard pill to swallow,” advertisers should decrease their reliance on targeting ads based on their audiences’ past online behavior,” he argues. “It’s unsettling and invasive. Instead, advertisers should use contextual targeting to place ads on videos relevant to their brand. Video analytics has advanced to the point where you can precisely identify what’s happening on the screen, which allows you to do things like, for example, advertise a grill immediately after a barbeque scene.”

Advertisers should work on mastering the spectrum of personalization and targeting so as to balance respecting viewers’ privacy and their goal of reaching the right people with the right messages, Tal Chalozin, chief technology officer and co-founder of connected TV advertising technology company Innovid, told Morning Consult.

“People don’t hate advertising — they hate irrelevant advertising, and they hate it when they feel like the ad knows too much,” said Eric John, vice president of the Interactive Advertising Bureau’s Media Center.

Asked which new streaming service ad formats they most prefer, 16% of the Morning Consult survey respondents picked binge ads, and 12% picked ads on their home screens.

But with a +/- 2% margin of error for the survey, those two are effectively tied. And the other options were picked by only slightly smaller percentages: 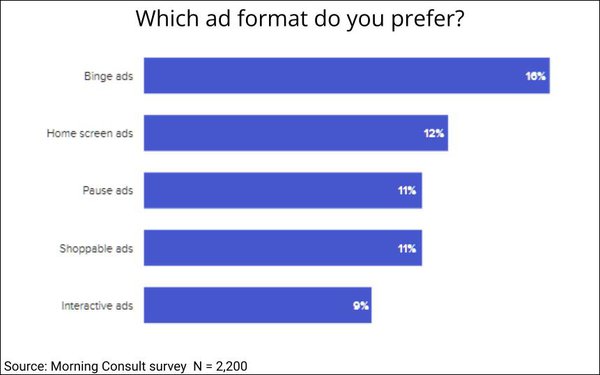 Bottom line: The industry needs to move quickly to cooperate to address the repetition issues that are undermining users' experience.

But given the mounting consumer and regulatory backlash on privacy issues, allowing invasive data collection and use practices to take hold in the still-nascent streaming service business may ultimately pose an even greater threat to business models.

advanced tv, connected tv, ctv, research, streaming
2 comments about "Streaming Ads: 44% Say There Are Too Many, 69% Say They're Repetitive, 53% Find Them Invasive".
Check to receive email when comments are posted.
Read more comments >
Next story loading