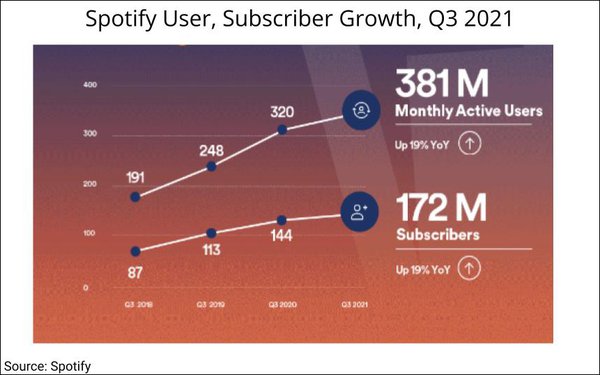 Spotify Technology SA’s billions of investment in advertising technology and developing a podcast business are starting to pay off.

The company, which has historically derived nearly all of its revenue from paid subscriptions to its services, saw ad revenue leap by 75% to $323 million euros in the third quarter.

That brought advertising’s share of total revenue to a new high of 13%.

The company — which has been under increasing pressure this year from investors impatient with its audience network strategy, including the new podcast business — is now projecting that annual ad revenue will exceed 1 billion euros for the first time in 2021, to hit $1.16 billion, and that advertising will eventually represent 20% of total sales.

The paid or premium subscriptions revenue channel rose 22%, to 2.18 billion euros in the quarter, bringing total revenue to 2.5 billion euros (+7%).

Monthly active users (MAUs) also rose 19% YoY, to 381 million — up from 365 million in Q2 and near the top end of the company’s guidance range. All regions saw double-digit growth, including 86 new markets, led by South Korea, Bangladesh and Pakistan.

Operating income rose to 75 million euros — up from 12 million in Q2 and a 40-million loss in the year-ago third quarter.