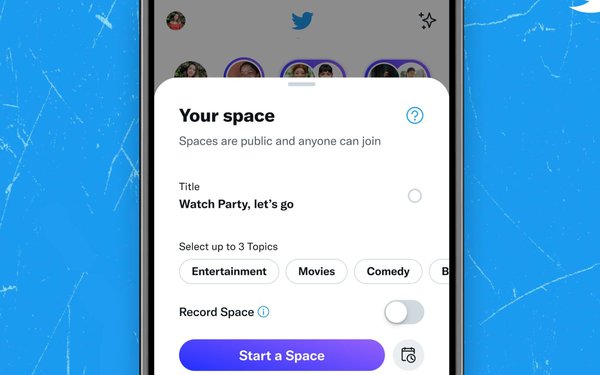 In this rollout, Spaces Recording will be available at first to a select number of hosts on iOS and all listeners on iOS and Android. Twitter says it will soon expand to all users, “within a few weeks,” according to a report by The Verge.

With this update, listeners of a live Space will now be able to replay the conversation and share it on their timelines.

Twitter Spaces promoted tweets will include a link directly to the recording in place of a note that the broadcast is done.

To utilize Spaces Recording, hosts will toggle on “Record Space” before launching a Space and participants will see a recording icon when they join.

Hosts will have access to the full-length Recording for 30 days after the broadcast ends. While they can share or Tweet it, listeners are able to play back the recording from their timelines and share across their networks.

Hosts have the power to delete a Spaces Recording whenever they want. However, Twitter will hold a data file of the recording between 30 and 120 days -- a step toward checking for abusive or hateful content.

Recording spaces is just one deliberate move for Twitter to improve the Host and listener experience.

Other recent updates include expanding hosting capabilities to everyone on iOS and Android, adding a new Spaces Tab for English-speakers on iOS (with added languages and Android capabilities coming soon), ticketed Spaces that users pay a fee to join, and use of up to three Topics to promote a Space.