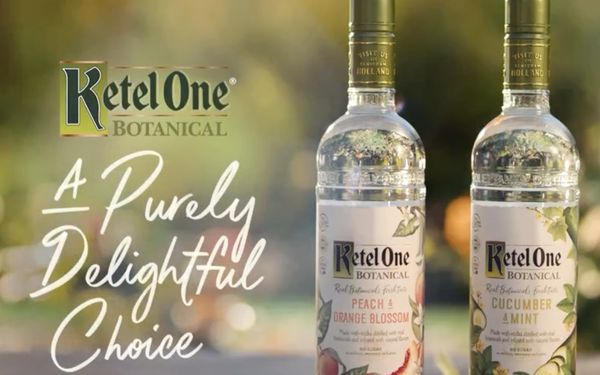 Ketel One Botanical, Diageo’s vodka distilled with botanicals and infused with natural fruit and botanical essences, has debuted its first commercial since the brand's 2018 launch. In the 15-second spot "A Purely Delightful Choice" from the FIG agency, a woman travels through a garden of fruits and florals enroute to bottles of Ketel One Botanical in its three flavors: Peach & Orange Blossom, Cucumber & Mint, and Grapefruit & Rose.

The aim of the spot and two others set to debut in coming months is to push the Botanical Spritz -- a cocktail consisting of Ketel One Botanical and sparkling water -- which is shown alongside the three bottles in in a wine glass with ice and a grapefruit slice.

Indeed, Ketel One is so enthusiastic about the Botanical Spritz that it released a ready-to-drink canned version, the Ketel One Botanical Vodka Spritz, last year.  That’s still only available regionally, so it’s not included in the national advertising, Olivia Kupfer, brand director, Ketel One Vodka, explained to Marketing Daily.

Other players in the botanical vodka category include Square One Botanical, infused with essences of pear, rose, chamomile, lemon verbena, lavender, rosemary, coriander and citrus peel ($34.99), and Greencures’ Hollywood Green Botanical, made with elderflower and woodruff flowers ($31.99).