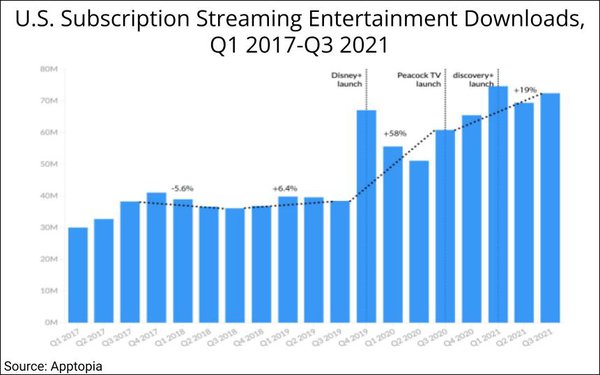 This year is already the strongest to date for downloads of streaming entertainment apps in the U.S., and HBO Max is leading the pack in growth, according to the latest report from Apptopia.

“Subscription” as defined here includes both paid and nonpaid, advertising-supported apps, such as Tubi and Pluto TV — and underscoring the growth of ad-supported options, both made the top 10 in U.S. and worldwide downloads: 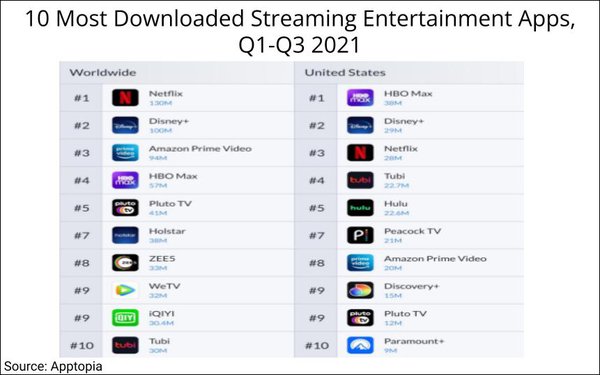 (Apptopia notes that the download numbers for Netflix and AMC+ reflect the fact that, unlike most others tracked, subscriptions to those services cannot be purchased through their mobile apps.)

Even with no mobile in-app sub purchases and despite its uphill battle for more growth in the U.S., Netflix continues to expand and outpace all others worldwide, and holds the No. 3 downloads position in the U.S.

However, Disney+ is close behind Netflix worldwide, as well as being the leader in download growth in the U.S. Also, the Disney+ regional offshoot service Hotstar ranks seventh globally.

HBO Max ranks fourth worldwide, as well as first in the U.S.

Amazon Prime Video ranks eighth in the U.S. — below Netflix, Tubi, Hulu and Peacock, as well as leaders Max and Disney+ — but it ranks third globally.

On a gross revenue basis, Disney+ is already the champ, leading both in the U.S. and worldwide (although its very-low-priced Hotstar service made neither ranking): 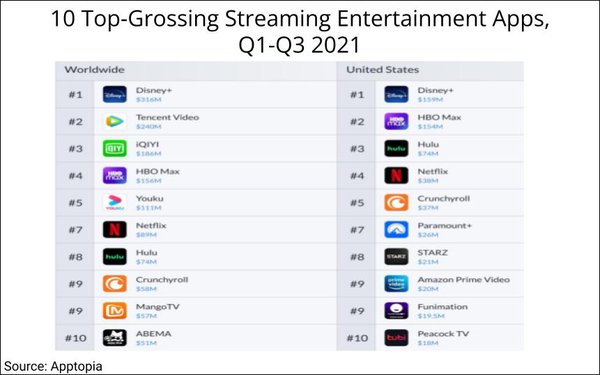 HBO Max is also a leader on the app revenue front, coming in second in the U.S. and fourth worldwide.

Interestingly, Hulu -- which has a 30-day free trial, as well as significant number of subs paid for by third parties like Verizon as part of tie-in deals -- ranks No. 3 in U.S. app revenue, above Netflix at No. 4.

Likely due to not selling subs in its mobile app, Netflix ranks just seventh worldwide in app revenue, despite its dominance in sub volume and presence across international markets,