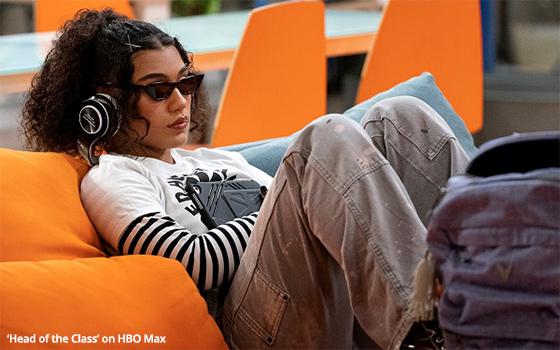 Another outtake from some notes I jotted down recently while viewing a new TV show falls into the same category as some off-the-cuff comments made in September on two other shows.

Those shows were the season premiere of “Law & Order: SVU” on NBC and the series premiere of the remake of “The Wonder Years” on ABC.

The TV Blog published here on October 4 highlighted a racist comment made by one of the detective characters on “SVU” and an anti-Semitic comment uttered by a boy in “The Wonder Years.”

This blog concerns the remake of the old high-school comedy from the 1980s, “Head of the Class,” that starts streaming Thursday on HBO Max.

The new version -- which was the subject of a previous TV Blog earlier this week -- is a very contemporary, of-the-moment take on the lives of teens.

In an effort to look and sound thoroughly modern, the central teen characters -- who are gifted and seen mainly in a debate class -- have discussions on various topics and issues.

These range from teen concerns such as dating, crushes and social acceptance to more worldly subjects such as cancel culture and cryptocurrency (these last two serving as class debate topics).

The teens in the show engage in the kind of flippant, world-weary dialogues that are common to TV shows of this ilk.

Some might even unkindly regard the teens in these kinds of shows as know-it-alls who are hard to take, but that is not really the point or aim of this TV Blog.

Instead, the focus here is on a line of dialogue uttered by one of the girls in the class who is evidently of Asian descent (if I may be permitted to form this conclusion).

After hearing a debate argument by one of her classmates who is white, ambitious and wears a tie (not unlike the Alex Keaton character played by Michael J. Fox so long ago on “Family Ties”), she says with a sigh, “God, grant me the confidence of a white man.”

From this, one supposes, we are to assume she means that the confidence of this particular white teen is something to be denigrated, and that his confidence should be regarded as obnoxious.

Meanwhile, I’m thinking: He’s just a kid whose self-confidence is admirable in a young person, be they white, black or Asian.

We might assume from her “confidence” comment that she feels that she lacks some of the same confidence in herself, perhaps because she is non-white.

One hopes that this apparent “less than” feeling that she is experiencing does not afflict other Asian-Americans generally.

An argument can be made that Asian-Americans as a community probably suffer from confidence deficits roughly in the same proportion as other groups.

As a matter of fact, the Asian-American character on the new “Head of the Class” who uttered this line of dialogue comes across as uber-confident in every other scene she is in.

So, where does this throwaway line that disparages a white teen for being confident in himself come from, since it does not jibe with anything we have already picked up about the obvious confidence of this gifted teen girl who just happens to be Asian-American? Answer: It comes from script writers.

All of this being said, this commentary is not meant to wholly condemn this sitcom as racist. Indeed, having singled out the one line of dialogue discussed above, it is fair to note that that was the only one of its kind in the first three episodes of “Head of the Class” that I previewed.

In this way, it is the very definition of a throwaway line. And, as such, it should have been thrown away.