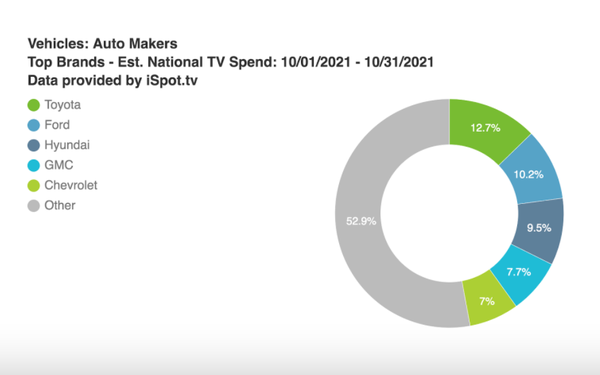 The estimated national TV spending by automaker dipped 11% in October compared to a year ago, according to iSpot.tv.

Toyota was all-in on major sporting events in October, with nearly 83% of the brand’s national TV ad spend coming during NFL games. Another 6.5% went toward MLB games, while the NBA had 1.3% of spend in the early weeks of the 2021-22 season.

Ford’s strategy was similarly sports-focused: 48.5% of national TV ad spend was dedicated to the NFL, with another 23.8% for MLB, and 1.9% toward college football, per iSpot.tv.

“With the fall TV schedule back to ‘normal,’ you saw a return to ‘normal’ for automaker ad spend and creative approaches on TV as well this October,” said Stuart Schwartzapfel, SVP, Media Partnerships at iSpot.tv. “Between college and pro football, the MLB Playoffs and fall primetime TV lineups, the month presented numerous options to get in front of large, predictable audiences, and these brands were eager to deliver new 2022 vehicle messaging.”

Mercedes-Benz used football in large part to fuel its year-over-year rise, as the NFL and college football combined for almost 53% of spend in October 2021 compared to about 36% in October 2020.

For Kia, the spend focused more on non-sports programming this October compared to a year ago with drama and action shows, reality shows and movies all making up a larger percentage of spend than individual sports. Last year, the NBA made up over 36% of the brand’s October spend, to lead all programs, per iSpot.tv.

NFL games were a major source of TV ad impressions for automakers, as is the case every fall. The MLB Playoffs provides another big opportunity for these brands to get in front of large audiences, though. Automakers were the third-most-seen brand industry during MLB games in October, with 6.3% of impressions.