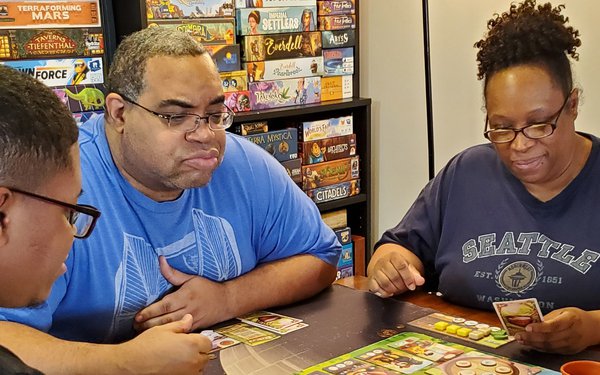 Even before COVID-19 lockdowns drew the bored to board games, that entertainment category had been on a surge due to such factors as gaming conventions, gaming cafes and nerd culture, according to Arizton Advisory & Intelligence.

Major players like Hasbro and Mattel, though, have just a small share of the market, with independent vendors accounting for the majority, Arizton pointed out. The indie ranks have been fueled largely by crowdsourcing technologies, says board game researcher Tanya Pobuda, pointing to 24,095 projects tagged as board games on Kickstarter in 2020.

Twelve of those indie board game marketers have now teamed with YouTube’s “Our Family Plays Games” (“OFPG”) to celebrate the show’s 100th episode this Sunday by giving free games to 30 viewers who email the show naming their favorite episode and why.

Each 45-minute-plus episode of “OFPG,” which has garnered more than 14,000 subscribers since its pre-pandemic launch in January 2020, stars a Black family -- husband, wife, and teenage son – who play board games, provide industry news, interview industry execs, and discuss the importance of diversity and inclusion in what the show labels a “white-male-dominated” hobby.

“The board game industry and the wider hobby community are grappling with systemic problems caused by a lack of equity, diversity and inclusion,” concurs Pobuda.

“Many of our subscribers have said that we are a ’breath of fresh air’ and exactly what this hobby has been missing, and they were happy to subscribe and continue to support our channel,” “OFPG” dad Miklos Fitch told Marketing Daily.

Arizton Advisory & Intelligence estimated U.S. board game sales at $3 billion in 2020, with COVID-19  increasing the popularity of board games in homes, but actually adversely affecting the industry as a whole -- due to such factors as a 35% decline in traffic to U.S. board game cage cafes even after the easing of lockdown restrictions, along with the cancellation of several mega-events and gaming conventions.

“OFPG,” however, may have benefited from another trend -- an increased interest in educational games caused by school closures -- with such sales increasing by 18% across the globe during 2020.

“The pandemic was advantageous for our channel because people were confined to their homes and were looking for the ‘new and different,’” Fitch said.

“OFPG” grew based largely on word-of-mouth among the gaming crowd, highlighted by invitations to appear on two established board game shows “The Dice Tower” and “Watch It Played” and then on ABC’s “Good Morning America.”

The series continues to be self-promoted, with Fitch garnering interviews on podcasts and TV, and appearing at board game conventions.

Monetization comes from such sponsors as KTBG and Many Worlds Tavern, paid previews, appearance fees, and merchandise sales through Spring.com. “All other funding for the channel comes out of our pocket,” Fitch says.

“We would say our audience’s demographics are diverse from the comments we received from all over the world, but still tend toward majority white,” Fitch said. “We believe [game] publishers are trying to target a wider diverse audience when they come to us to promote their games.”