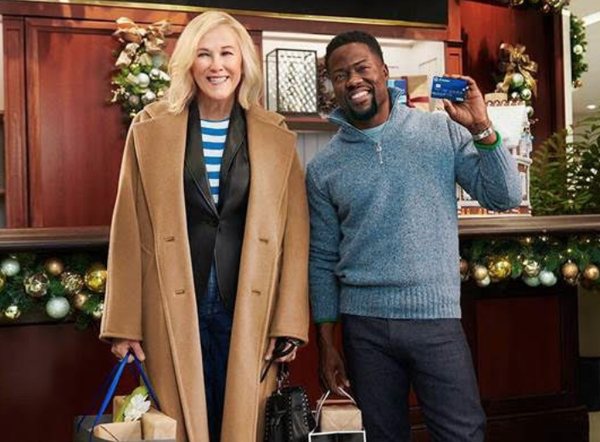 The spot brings together “Home Alone” holiday movie mom Catherine O’Hara with comedian and Chase Freedom partner Kevin Hart to show how consumers can cash back while shopping and spending this season.

Reminiscent of the movie where O’Hara loses track of her son, Kevin McCallister, she once again loses another Kevin, this time while holiday shopping, recreating her iconic “Kevin” yell as she frantically searches the store. Viewers don’t know she’s searching for a different Kevin: Kevin Hart, who is off “cashbacking” with his Chase Freedom Unlimited Card.

When they reunite, she invites him to cash back with her on some lattes.

The campaign, produced by Droga5 and directed by Jake Symansky, also includes radio.

"It’s such a beautifully simple misdirect that we knew we could have a lot of fun with it,” Brady tells Marketing Daily. “Combine that with the opportunity to reference a legendary film and work with such iconic actors, and you have yourself a true holiday miracle.”

The effort builds on Chase Freedom Unlimited’s “How Do You Cash Back?” tag line introduced in recent campaigns.

“Through this campaign, we want to encourage consumers to use Freedom Unlimited when shopping this holiday season; making the sometimes-painful task of holiday shopping a bit more joyful for cardmembers by cashbacking while they purchase gifts for their family and friends,” Bowdoin tells Marketing Daily.

The effort targets existing cardmembers as well as prospective cardmembers, she says.

“We’re also hoping that the campaign’s dash of nostalgia and humor brings a smile to everyone during the holiday shopping season,” Bowdoin says.