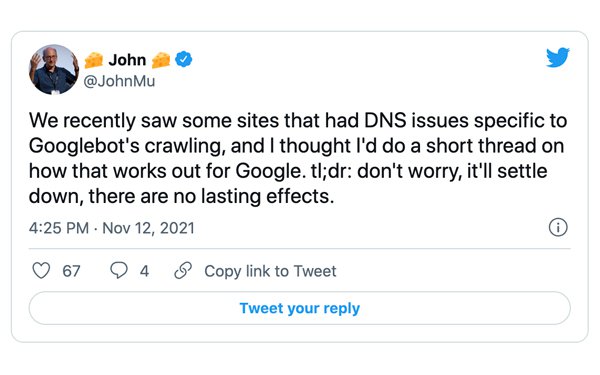 Google Search did not crawl or index about two million domains hosted on SiteGround for the past two days, but that issue has been resolved.

By Friday morning the issue had been resolved, but not before some customers took to Twitter with unhappy remarks.

Most were upset with SiteGround for not being more transparent with its customers.

“We are losing tens of thousands of dollars in paid leads via PPC, and our SEO is suffering as a result of pages not being crawled,” tweeted @tylerkomar. “This is a VERY serious problem for agencies. Only finding out about this on reddit and twitter is even more concerning.”

Search agencies that support brands need to be kept up-to-date, which seems to be the biggest concern. Early this morning SiteGround tweeted that it implemented a fix for the Google bot crawling issue experienced by some sites. Crawling resumed.

Google Webmaster Trends Analyst John Mueller also chimed in on Twitter to help companies deal with these types of outages. In the thread, Mueller said not to worry too much about the issues some may have experienced from the outage. It will auto correct without any lasting effects.

“If you’re curious about what happens in Google Search with an outage like Facebook recently had, it’s generally a [two]-part reaction: when we can't reach a site for network / DNS reasons, we see it like a 5xx HTTP server error. This means we reduce crawling,” Mueller wrote.

He explained that there are no lasting effects from these types of outages, and because of the way Google Search Console aggregates information about URLs via indexing, the error counts likely won't go down to zero immediately.

“What would I do if a site I cared about were affected?” Mueller tweeted. “I'd probably be angry & send the folks involved some chocolate. They've been doing awesome work, and I'm sure they'll coordinate with infrastructure folks to make it work even better.”