60% Give High Enjoyment Rating To Streamed Shows With Customized Ads 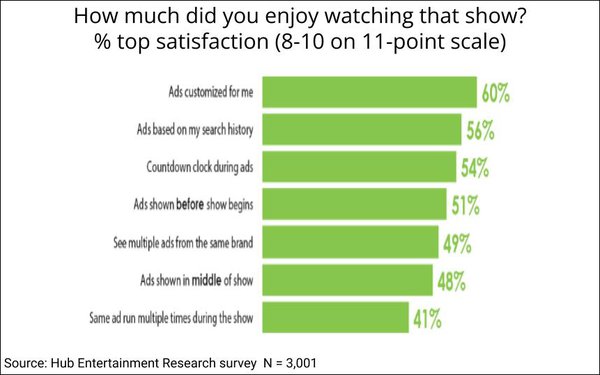 Hub Entertainment Research has released another survey finding indicating that many streaming viewers aren’t opposed to advertising, given acceptable content and delivery modes.

This one — from a “TV Advertising: Fact Vs. Fiction” survey of 3,001 U.S. consumers ages 14 to 74 who watch at least an hour of TV per week, conducted in June — shows 60% giving top satisfaction ratings (between 8 and 10 on an 11-point scale) to shows that included ads “customized to me.”

Fewer than half gave high ratings to shows that included multiple ads from the same brand (49%), ads in the middle of shows (48%) and shows running the same ad multiple times (41%).

What this doesn’t provide: A comparison of how the same respondents would rate satisfaction of shows that contain no advertising.