'Namastay Away, Lululemon:' Peloton Bites Back in Leggings Free-For-All 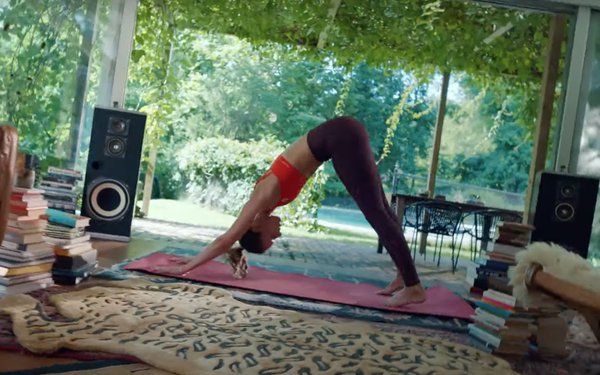 Image above from Peloton ad

Just weeks after Lululemon accused Peloton Interactive of infringing on five of its apparel patents, Peloton is swinging back. The connected fitness brand reportedly filed a suit in federal court in New York, asking for a declaration that Lululemon's claims are without any merit.

The skirmish comes just as Peloton, suddenly struggling in its core equipment business, is ramping up marketing for its new clothing line. Much of the clothing has the same vibe of Lululemon's collections, right down to the post-workout chic Lululemon has long sought to capture. (Take a peek at an introductory ad from Peloton.)

The legal issues highlight just how little differentiation there is in an ever-more-crowded category, especially in the D2C channel, with hundreds of companies selling gym staples. (Adding to the confusion: Since 2016 and until recently, the two companies had a co-branding deal, with some of Lululemon's products sold on the Peloton site.)

And as companies tussle over their share of the leggings and sports bra universe, it raises a bigger question: Just how long can brands bank on consumers' seemingly endless appetite for athleisure?

Lululemon pioneered the athleisure category and still dominates the premium end with its $4.2 billion annual sales.

But traditional brands have barreled in. Nike leads the D2C onslaught, racing to sell directly to exercisers through its owned digital and retail channels. Under Armour is also pushing hard, and Adidas has said it intends to double its ecommerce business in the next five years.

This summer, Levi Strauss announced it was entering the category with the acquisition of cult favorite Beyond Yoga, which it says will add more than $100 million to its net revenue next fiscal year. And Gap promises that its Athleta brand will reach $2 billion in sales by 2023.

Private-label brands are becoming increasingly strong players, especially at the value end. Target's All in Motion, for instance, passed $1 billion in sales earlier this year.

Smaller digital startups are cooking up their own winning strategies, with a list that includes Vuori, Sweaty Betty, Fabletics and Gymshark.

Some kind of shakeout seems inevitable. The pandemic has further fueled a surge in athleisure, as consumers changed into comfier clothes for lounging and higher-performance gear as they stepped up their workouts.  In the first half of this year, NPD says activewear sales grew by more than 40% compared to the same period in 2020, and more than 25% compared to 2019.

And while that growth continued into the third quarter, when active revenues grew by about 20%, growth slowed in September. "Kids' products were the stars in activewear, growing nearly 25% for the third quarter," writes Matt Powell, NPD's sports industry advisor.

"Products for women lagged the category, only growing in the mid-single digits. Nike, Adidas, and Under Armour all ceded share in women's products."

Certainly, experts aren't predicting a collapse in fitness trends, and many believe the push for healthier lifestyles is here for the duration.

But which brands will win is hard to say. A year ago, Peloton was everyone's D2C darling. Yet earlier this month, it stunned the investment community when it slashed its annual sales forecast by as much as $1 billion, leading some analysts to downgrade the stock. And the New York-based company conceded momentum is waning for bikes and treadmill machines, with more people headed back to gyms.

For Black Friday, Peloton is trying to tempt buyers by knocking as much as $350 off its equipment.