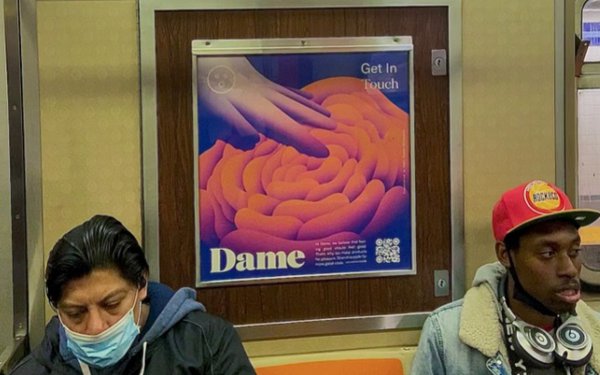 The result is Dame’s “Get In Touch With Yourself” campaign running in New York Metropolitan Transportation Authority subway cars.

It’s the biggest out-of-home brand-awareness campaign to date for the self-described “sexual wellness” company, and represents the first such campaign allowed on the MTA.

Dame sells vibrators, lubricants and other products for use by females and couples.

The conflict with the MTA began in July of 2018 when Dame submitted ads to the agency. After the MTA provided feedback, Dame revised its ads—only to have them rejected five months later.

The company sued the MTA in federal court in June of 2019, claiming that rejection of its sex-toy ads was unconstitutional given that the MTA had allowed ads for, among other things, dating services and erectile-disfunction remedies.

“Imagine you are a woman standing in an MTA subway car,” began Dame’s 40-page lawsuit. “Look left and you see phallic cactuses—both flaccid and erect—which promote erectile dysfunction medication beneath the slogan ‘hard made easy.’”

Gazing upward, subway riders young and old could see ads for the Museum of Sex “featuring sets of naked buttocks or women dancing in a room full of inflated plastic breasts.”

Earlier this month, Dame says it reached an “amicable” settlement with the MTA enabling its current campaign.

Rather than showing products, the ads use what the company describes as “abstract imagery” accompanied by such phrases as “It’s softness and power at once” and “It’s like touching the sunrise.”

“Sexual pleasure is a critical part of wellbeing,” Dame CEO Alexandra Fine said in a news release announcing the settlement.

“We’ve had to fight for our right to advertise and we believe this is a step forward in closing the pleasure gap.”