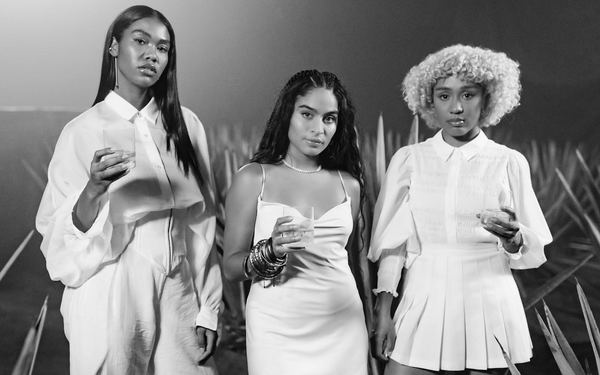 Can a super-premium tequila be equated with a classic song?

According to Bacardi’s Patrón Tequila, both it and the venerable Latin American tune "Gracias a la Vida" (“Thank You To Life”) are “Simple Yet Perfect.”

Hence, a new campaign with that title, consisting of a black-and-white music video and broadcast/digital spots from MullenLowe LA that feature an a capella, bilingual version of the classic Latin American song rendered by noted singers Jessie Reyez, Amber Mark and Fousheé.

Likewise, Patrón boasts, just three elements can be found in its vodka.

The :60, :30, and :15 spots, running during such content as the NBA on TNT, the NFL on NBC, and on Hulu, are shorter versions of the music video, which was produced by Stink Films, with direction by Leo Aguirre and musical production by Yerba Buena band founder Andres Levin.

“With this campaign, the powerful voices of these three talented artists mirror the story of our artisanal tequila-making process," said Kathy Parker, Patrón’s president and global chief marketing officer.

Reyez noted that Patrón was "a brand I respect for how they honor tradition, Latino heritage and passion."

In 2018, Bacardi spent $5.1 billion to buy out the 30% of Patrón that it did not already own. It’s the third best-selling tequila in bars worldwide, behind only Diageo’s Don Julio and Thomas Estes’ Ocho, according to Drinks International.

Koncept Analytics has predicted that the U.S. tequila market will grow at 5.06% annually through 2024, to $4.74 billion, driven largely by such factors as improving economic conditions, and the growing Hispanic, female and urban populations, offset perhaps by increasing cannabis consumption and decrease in agave plants.

The Koncept research noted that super-premium held the largest share of the U.S. tequila market (versus premium, high-end premium and value segments), with a market shift occurring from binge drinking to drinking sophisticated cocktails.