Inside The Stylish World Of Louis Vuitton 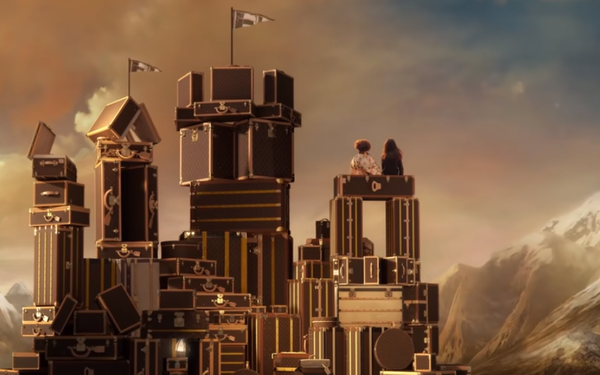 Did you ever ponder what’s going on in a stack of fancy clothes chests?

Neither have I, but those suitcases provide a jumping-off point for Roman Coppola’s new Louis Vuitton ad. He served as creative director on the effort. Paris-based La/Pac was the agency.

The ad, entitled “Holiday House,” stars actress Stacy Martin and features her playing with a couple of young kids amid the chests. An early shot shows them silhouetted among dozens of chests in front of a mountain.

Martin then emerges from the house she was in and frolics on a ski slope, but the slope we see is actually an illusion in a glass bubble. Martin then looks closely into a dollhouse and sees people exchanging gifts. The next scene is of Martin and other actors set against fake clouds. Then we see people dancing and Martin leaving the area.

The final shot reveals that the action took place in one of the chests in the silhouette.

All of this is scored to the 1976 disco hit “Young Hearts Run Free,” by Candi Staton.

What does it all mean? Probably nothing, but the ad is an excuse to gawk at fabulous clothes, hot models and enjoy the aesthetic of Vuitton, if only for 90 seconds.