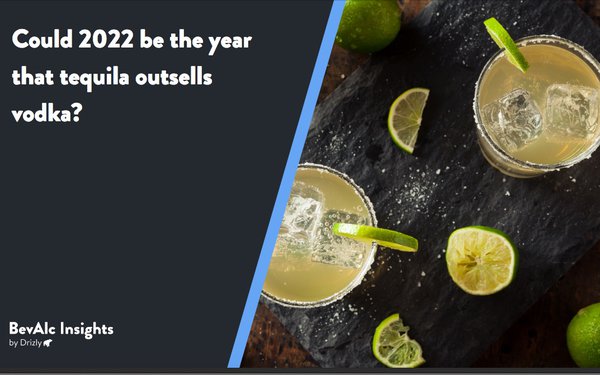 Tequila may overtake vodka in North American retail sales next year, craft beer and RTDs may reclaim shelf space from hard seltzer, and cannabis- and CBD-infused beverages generate far greater liquor store potential than non-alcoholic beverages -- all according to the third annual BevAlc Insights by Drizly Retail Report, a survey of more than 500 retailers conducted in November by the alcohol ecommerce giant.

Uber-owned Drizly found that nearly 80% of the surveyed retailers plan to carry more tequila next year, on a par with bourbon, and 40 points ahead of vodka. This mirrors sales trends on its platform, Drizly said, where tequila's share of spirits sales have grown 13% in the past few years, as vodka declined 2%.

More than 50% of the retailers said cannabis- and CBD-infused beverages have the industry's biggest growth potential, compared with only 26% who cited non-alcoholic products. On the other hand, Drizly noted that 90% of the retailers now stock non-alcoholic beer, wine or other alternatives, and that share of such products on Drizly has risen 120% since last year.

Drizly also found strong interest in locally made products (sought by 66% of respondents), followed by organic and natural products, celebrity-owned brands, “and “health-conscious drinks,” all of which had over 50% interest.

Product shortages caused by supply chain issues were seen as the biggest challenge going into 2022, cited by 54% of respondents, followed by price increases (22%) and labor shortages (20%).

An immediate product shortage, in light of upcoming New Year’s celebrations, is Champagne, with 80% saying they were worried about inventory running short.

However, 73% of the surveyed retailers were bullish on the holiday season as a whole, expecting to meet or exceed last year’s sales.

“An increase in alcohol gifting may explain some of the optimism,” Drizly reported. “More than half of retailers polled expect at least 10% of holiday purchases to be made with the intent of gifting.”

Last December, Drizly noted, gifting on its platform rose to 20% of sales, and gift share has risen 66% YOY in 2021. “What’s more, consumers typically spend 120% more per item when sending a gift.”

Retailers surveyed by BevAlc Insights were not all Drizly retail partners, but it was noted that, of those who do sell online, “more than a quarter of that group derives over 20% of their sales from those platforms.”

Drizly said it now has over 5,000 retail partners, an increase of 30% in the past year.