Titan Casket Wants To Shake Up The Coffin Business 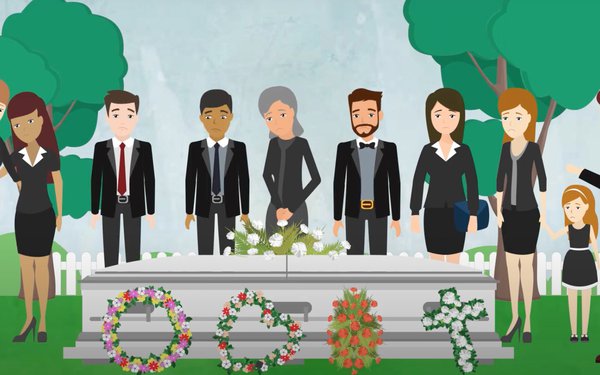 Funerals are the third-biggest purchase many Americans ever make, but until now, there hasn’t been much out-of-the-box thinking.

Titan Casket plans to change that, offering consumers better caskets, more selection and lower prices. “It’s a very rewarding thing to help people save a lot of money at the worst time in their lives,” says Scott Ginsberg, chief executive officer, who began working on the business in 2016. “We want to make sure our customers don’t have to suffer a financial loss just because they’ve had an emotional one.”

Most people bury their loved ones in a casket purchased at a funeral home, choosing from a small selection of overpriced coffins.

Typically, funeral homes mark caskets up between 200% and 400%, Ginsberg tells D2C FYI. And few consumers are even aware that federal law allows them to shop elsewhere, supplying their own casket.

That’s where Titan comes in, delivering standard caskets or creating customized options, shipped directly to funeral homes. And while customers can buy them through Walmart, Costco, Sam’s Clubs or Amazon, the bulk of its orders come directly through its own site.

Ginsberg had spent 20 years in the casket business and knew how ready it was for reinvention in 2018, as he began to scale the business. He reached out to co-founder Josh Siegel, a Columbia Business School connection, who was then the general manager of Amazon’s television business. The two began working toward the 2020 launch.

“At Amazon, I had been in charge of shipping heavy, delicate items, so I’ve been able to translate those logistics skills to what we do here,” Siegel says.

Funerals are a $20 billion industry in the U.S., with caskets accounting for $4 billion each year. And for now, that’s Titan focus, although plans call for expansion into ancillary areas, including urns, vaults and flowers.

The two co-founders say the category is especially ripe for disruption right now. First, people are increasingly willing -- and eager -- to make large purchases online, from cars to mattresses to appliances. That trend has fueled a greater demand for transparency and customization.

And consumers want larger selections, not the dozen or so most funeral homes have. At Titan, they can choose from 20 different colors and a variety of sizes. There’s a lovely fair-trade certified seagrass option ($1,695), Jasper cedar ($2,499) or steel caskets made to honor veterans ($2,095).

Some customers want customized options. Titan has made just about any color combination, including a memorable purple one with a green lining. Mostly, those choices come from family members planning the funeral, but at least occasionally, from the casket’s ultimate owners.

“We have customers who are terminally ill, and very intent on getting exactly what they want,” Ginsberg says. “Those are some of the most gratifying conversations we have.”

There’s also a growing demand for environmentally friendly options such as pine and wicker.

Another set of customers are those struggling to afford the type of burial they want. The cost of an average funeral and viewing this year was $7,848, according to the National Funeral Directors Association, which includes an estimated $2,500 for a metal casket. Adding a vault, the metal grave liner, runs about $1,500.

With cremation, the average funeral costs about $6,970.

With all types of shoppers, Ginsberg says service is ultimately more important than the product. “We take their hands and walk them through the funeral process,” Ginsberg says. “We let them know what to expect.”

Deliveries always run on a tight timeline. “We need to get our products out the door within 24 hours and to the funeral home in one to three days,” says Siegel. The company accomplishes that using a variety of manufacturers, four warehouses, and relationships with various shippers, including FedEx and UPS.

And while funeral directors can get a little frosty, “we work with them every day, and generally have good relationships,” says Siegel. In fact, word-of-mouth from funeral directors has been key to the company’s growth, along with paid search.

The two have bootstrapped the business but may look to raise funding next year. It runs with a lean staff of 10.

“We want to be the digital solution and become the future of funerals. People are focusing on events and experiences differently, and we want to meet the change,” says Ginsberg.

The two say they aren’t particularly worried about new competitors. Siegel points to the explosion in online and D2C mattress companies, for example. “I’m sure you’d find that buying a mattress today is a better experience than it was 15 years ago, both in terms of pricing and transparency. If we can do the same thing for the funeral industry, well then, mission accomplished,” he says. “That would be a great outcome."