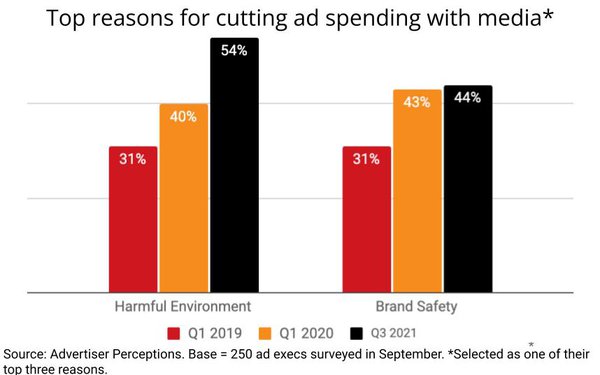 While many advertisers have long been concerned about the explicit "brand safety" issues related to having their ads run adjacent to potentially harmful content, they are now even more concerned about the overall harm caused by a media outlet's overall content, and they are inclined to reduce their ad budgets to avoid supporting it.

"It's become a broader conversation about brand suitability," says Sarah Bolton, executive vice president of business intelligence at Advertiser Perceptions, who oversees the tracking study, and recently began boosting its frequency in an effort to understand how broader societal changes related to harmful content is influencing ad spending.

"With how much movement we have seen from the study fielded in February of 2020, a month prior to the whole world turning upside down, and then what we saw in February of 2021, it was dramatic in a lot of cases," she recalls, adding: "So it seemed to us that we should be checking in on this every six months."

Bolton noted that since it first began benchmarking the concern, there has been increasing angst about the role media -- especially big digital platforms -- played in distributing misinformation about the pandemic, the presidential election, social justice, etc., and big agency holding companies have begun creating "score cards" or licensing data rating the veracity of news and information on sites.

"They've begun recommending that their clients hold the media platforms and partners more accountable, and we wanted to see if that stuff was really taking hold," Bolton explains.

Since it began benchmarking it in February 2020, the percentage of advertisers and agency executives citing the overall harm of a media company or platform vs. the explicit harm of having their ads adjacent to it has grown dramatically (see chart above), but Bolton cautions this data likely is "attitudinal" vs. something that may be having a material impact on current ad-spending decisions.

"What we're measuring is a leading indicator of what's going to happen with spending, because we think attitude leads behavior in some of these examples," she said, adding that different types of advertisers may have more or less ability to put their money where there mouths are.

"Not every advertiser has the luxury to reckon with it," she says, adding: "There are many that don't have the business luxury of taking that step and backing away from the clockwork performance of what they're already doing."

Interestingly, when Advertiser Perceptions breaks out the data for advertisers vs. agencies, it shows that clients are considerably more prone to hold platforms and media outlets accountable for publishing harmful content -- including the user-generated content of social media users -- than their agency counterparts are.

Bolton attributed this to business pragmatism, because agencies are ultimately responsible for making sure they deliver returns on their clients ad spending. 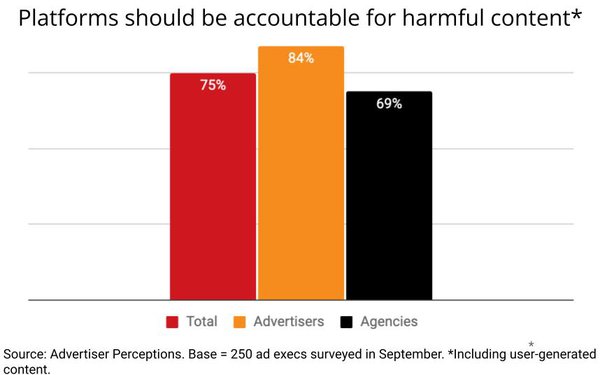