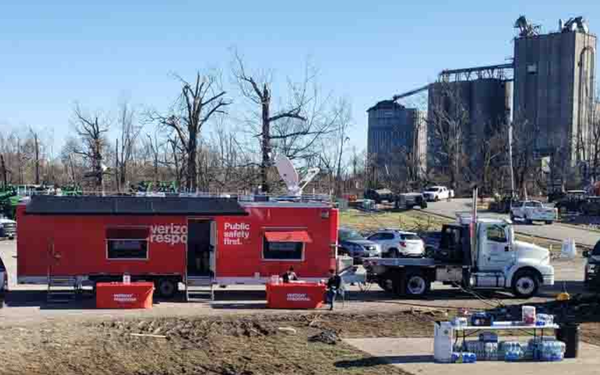 Multiple tornadoes touched down in Kentucky and five other states, devastating the city of Mayfield, Kentucky, resulting in at least 100 deaths, and leaving homes destroyed and tens of thousands without power. The tornado also killed at least six people in Illinois, where an Amazon distribution center in Edwardsville was hit.

Toyota Motor North America, which has a large manufacturing plant in Georgetown, Kentucky, announced more than $500,000 to assist with immediate relief and long-term recovery in Kentucky, and payment relief to customers throughout the affected region.

Combined support including contributions made by Toyota’s supplier partners, DENSO and Toyota Tsusho America, will reach $810,000. Additional support will be provided through local donation drives and double-match employee donation contributions.

Another automaker with significant ties to the Midwest, American Honda is contributing $500,000 in humanitarian aid to organizations supporting those impacted the most. The company's pledge includes corporate contributions of $250,000 to the American Red Cross and $250,000 to Feeding Kentucky to assist with both immediate relief and long-term recovery efforts, which includes food security for those most in need.

Verizon Foundation is making a $100,000 donation to the American Red Cross. To bolster recovery efforts, Verizon’s donation will be dedicated to regional disaster relief for communities impacted by tornadoes.

Procter & Gamble is bringing relief efforts via donations of P&G products and Tide Loads of Hope laundry services. The Tide Loads of Hope Mobile Laundry Units, powered by Matthew 25: Ministries, will wash the clothes of those affected by the storms as well as relief workers. P&G will also distribute personal care kits with everyday essentials including cleaning products.

"The state needs our help more than ever in the wake of this past weekend's devastating tornadoes," Harlow wrote in a social media post. "I ask that you donate whatever you can to help those affected by this tragedy.”

Arkansas-based companies Tyson Foods and Walmart are coming together to bring 600,000 meals to families hit by tornadoes as well as relief workers assisting with the recovery. Volunteers from Tyson locations will be helping with the efforts, which are part of the company’s Meals That Matter disaster relief program.

PepsiCo, and its philanthropic arm, The PepsiCo Foundation, announced a commitment of $300,000 and donations of food and water to provide holistic disaster relief support.

Ankeny, Iowa-based convenience store chain Casey’s General Stores said Monday it is donating $10,000 to the American Red Cross and is also collecting donations for the Red Cross through a round-up at the register program. The company also is sending a semitrailer truck filled with bottled water to Mayfield, Kentucky.