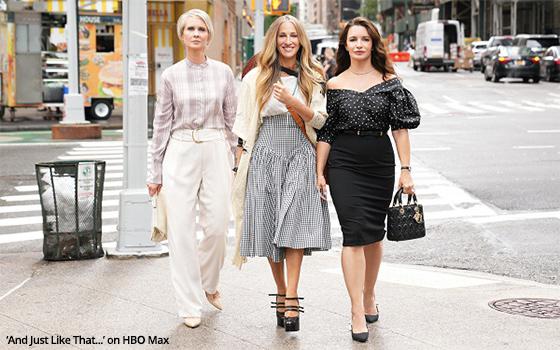 In the process of compiling some notes this week for the annual, year-end roundup of the year’s top news stories in television to be published later this month, I just added the story of Peloton and the negative shot the brand just took in the new “Sex and the City” sequel series.

All things considered (among them a shortage of big TV news stories this year as compared to some previous years), this Peloton story makes the list primarily because of its staying power. That is as good a sign as any that a story has legs, so to speak.

MediaPost has so far published six stories (including one or two commentaries) about this kerfuffle since December 10. That was one day after the show, “And Just Like That,” started streaming on HBO Max.

At the risk of eliciting groans from readers of this TV Blog (and not for the first time, I’m sure), here comes a seventh one.

The summary of the story goes like this: On the premiere episode of the show, one of the major characters on the previous series -- “Mr. Big” played by Chris Noth -- had an apparent heart attack and died while riding a Peloton bike.

According to all reports, this scene was produced without Peloton’s knowledge or participation. In other words, it was an unauthorized product placement, and in retrospect an unwelcome one.

Since the scene had a popular TV character suddenly dying on the product that is the underpinning of the entire company, Mr. Big’s death on a Peloton bike presented a problem.

The company responded with a commercial, featuring a very much alive Chris Noth, as a way of counteracting the negative publicity stemming from his character’s death -- making the proverbial lemonade out of lemons.

With that out of the way, here are a couple of lingering thoughts, starting with this death in the first place.

As much as Mr. Big’s death was a surprise, it was equally shocking that the character might not be a part of this new series going forward.

His on-again, off-again relationship with Carrie Bradshaw (Sarah Jessica Parker, above photo center) was one of the ongoing storylines that sustained the original series and its two subsequent spinoff movies.

It should go without saying but his death in the very first episode of this sequel series is a downer.

He and Carrie had been married for a while leading up to this incident, which means that our bubbly and upbeat Carrie has suddenly become a widow just as this series is getting started.

Unless the show intends on turning Carrie into a merry widow, Mr. Big’s death would seem to fly in the face of the mostly lighthearted approach that characterized the original series and its movies.

Following Mr. Big’s demise, a key question remains: Will the character ever be seen again on the show?

A Google search revealed nothing on that question, but IMDB.com has Noth appearing in nine more episodes, indicating that the character will be very much alive in various flashbacks. Or maybe IMDB is wrong.

Noth’s career has moved on too. He currently appears with Queen Latifah in “The Equalizer,” which has established itself as a solid hit for CBS. It should run for years.

Also missing from the new “Sex and the City” is Kim Cattrall and her Samantha character. The actress reportedly did not want to come back and play Samantha yet again. Plus, she and Sarah Jessica Parker are not exactly friendly either, reportedly.

Samantha’s absence on the new show was noted on the premiere of “And Just Like That.” It was said that she moved to London and simply became estranged from her friends.

And then there were three -- Carrie, Miranda (Cynthia Nixon, above left) and Charlotte (Kristin Davis).

It is not quite the same as Zeppo leaving the Marx Brothers, but the “Sex and the City” foursome had a kind of symmetry that now will not be part of the new show.

On the other hand, the three Marx Brothers -- Groucho, Harpo and Chico -- went on the make “A Night At the Opera” without Zeppo.