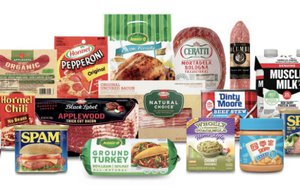 Three decades ago, Hormel Foods was best known as a pork producer and the marketer of brands like pork-derived, canned Spam.

Like other CPG companies, Hormel has been rationalizing its offerings through internal innovation and acquisitions. Recent examples of the latter include the roughly $700 million purchase of Skippy in 2013 and this year’s $3.4 billion deal for Planters nuts and snacks.

Speaking of Spam, the brand that many baby boomers grew up with just delivered its seventh consecutive year of growth.

As part of its innovation initiatives, Hormel’s 199 Ventures division has two new partnerships with Green Circle Foodtech Ventures and The Better Meat Co.

The following interview with 199 Ventures manager Bryan Kreske and Fred Halvin, Hormel’s vice president of corporate development, has been edited for brevity and clarity.

CPG FYI: What exactly does 199 Ventures do?

Bryan Kreske: The role of 199 Ventures is to work on the future of food and technology. What we’ve done to date is invest in partnerships with emerging food companies and entrepreneurs. One of the focus areas is to connect them with Hormel’s resources.

CPG FYI: What does Green Circle bring to the table?

Kreske: Hormel is an anchor partner in their food-tech venture funds. They’ve identified focus areas like alternative protein, plant-based protein and others like fermentation, food safety and shelf-life extension. They will identify companies and, as they make investments, there could be potential commercial partnership opportunities for us.

CPG FYI: What will you be doing with The Better Meat Co.?

Kreske: They’re a business-to-business startup. Our focus there is going to be collaboration. We think they’ve got this novel ingredient in the plant-based protein space. We’re getting early access to that and will work with them on potential commercial offerings.

CPG FYI: What does Hormel have in the alternative protein and plant-based space?

Kreske: Our current portfolio focuses on the pizza-toppings segment in the foodservice channel with our Happy Little Plants brand. We’ve got a plant-based pepperoni, sausage crumbles and a meatball-style topping right now. That’s an important space for us.

CPG FYI: What did Hormel see in Planters that Kraft Heinz did not?

Fred Halvin: We see iconic brands in large organizations such as Kraft Heinz that can be less appreciated in a much larger portfolio. We could tell there wasn’t the emphasis on the Planters brand through marketing, brand building and innovation that Hormel could bring to the table.

CPG FYI: What expansion plans do you have for Planters nuts?

Halvin: I won’t get real specific but generally speaking, new flavor varieties is an area that we recognized the Planters brand was underexposed to. Whether you talk about potato chips or whatever, flavor varieties is really where the growth is. Peanuts are no different.

Halvin: One of our strategic rationales for Planters other than it was an iconic brand was that it’s a snacking platform. It gives us access to new channels—for example, the convenience channel. While we had exposure to convenience, the order of magnitude that Planters brings to us is night and day versus what we had before.

CPG FYI: Would it be a safe guess that Spam’s growth arc hasn’t been driven by boomers?

Halvin: Over the past seven years or so, our focus and attention has been how to gain new consumers into the category. We’ve done that through a lot of our brand-building initiatives and how we talk to the consumer. We’ve seen the demographics of our consumers change significantly. We worked on making it sexy and how people can use it—whether though ingredients or on its own through a Spam burger.