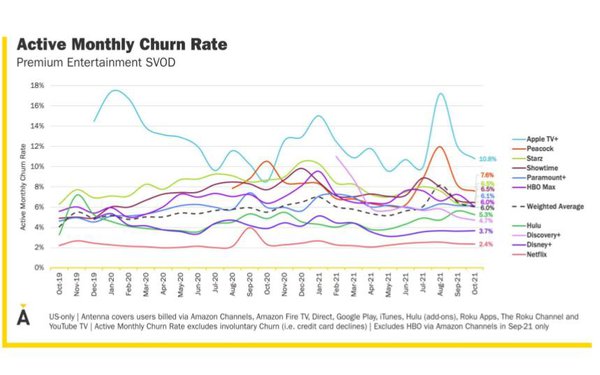 There are a number of ways to define and calculate subscriber churn, but the most basic and commonly used method is to divide the total number of cancels in a period — say a month —by the number of customers that existed as of the last day of the previous period/month.

Churn rates can and do vary significantly by whether the business is B2B or B2C (B2C cancellation rates are higher), by region, by industry, and by age and other demographics (in streaming, younger users are much more likely to add and cancel services) Churn is also routinely affected by seasonality, pricing changes and many other factors.

Some industries do routinely experience fairly high, double-digit average churn rates. For instance, in 2018, Recurly Research reported that the average churn rate for consumer magazine publishers was about 30%. Here’s a summary of other average industry churn rates from Recurly for that year: 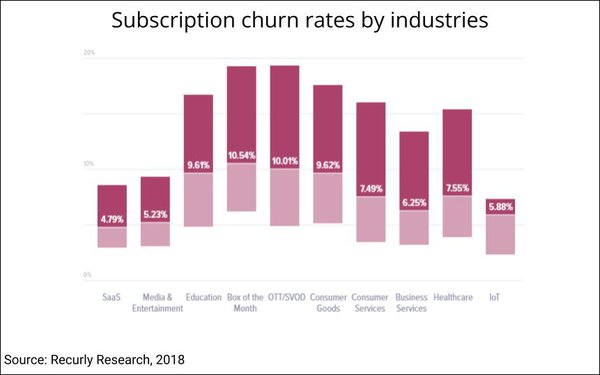 As you can see, over-the-top (OTT)/subscription video-on-demand (SVOD) services were averaging 10% churn at the time.

There has, of course, been tremendous change in the SVOD industry, including the massive boost driven by COVID lockdowns and the launch of new premium video streamers by several major players since 2019.

But has the competitive scenario, or other factors, so dramatically changed the terrain that the SVOD churn rate in the U.S. has more than tripled, to 35% or even 44%, as we’re now reading in some reports from respected research companies, based on surveys of consumers?

Antenna has a panel of 5 million U.S. consumers who have opted in to allow access to anonymized transactions data. Antenna cleans the data and weights it where necessary (for instance, to adjust for a slight skew to females on the panel) so that its results are statistically representative of the U.S. digital shopping population age 18 and older.

The chart at the top of the page summarizes the weighted average active monthly churn rates for 10 leading premium entertainment SVODs. Note that the rates include only voluntary cancels — not involuntary cancels due to factors such as credit card expirations/declines.

Antenna co-founder and chair Jonathan Carson says that using transaction data is critical to get an accurate, meaningful read.

"The subscription economy is so complex — with bundling, password sharing and annual plans we forget about, and subscriptions our family members purchase that we never even know about, how could we possibly expect a consumer to be able to convey his or her subscription behavior via survey questions?” he asks.

Will factors including consumers’ return to more normal out-of-home activities and the growing number of streaming services vying for their time and money — which is in turn driving an array of free trials and other promotional incentives — affect churn rates in 2022?

Certainly. But to what degree, and how consistently? Industry churn rates can’t be accurately projected into the future, even with current transaction data in hand, says Brendan Brady, content strategy associate at Antenna.

“There are so many factors that can affect churn for individual services, as well as the industry as a whole, that no one can predict — including pricing and a host of other business decisions, as well as external factors affecting consumer behavior,” Brady says. “For instance, it’s not clear whether churn rates will increase or decrease as the newer SVOD services settle in.”

Further, he notes, while churn is a very useful metric, it should not be viewed as a “be-all, end-all,” because elevated churn may be outweighed by other, positive outcomes of a decision or trend.

Brady points out specific examples of dramatic, short-lived upswings in churn that can be seen in the 2019 to 2021 data in the chart above.

HBO Max’s churn rate jumped after its precedent-setting decision to begin debuting all Warner Bros. films on Max at the same time as in theaters at the end of 2020 (through 2021)—but the churn that resulted from consumers cancelling their subscriptions after watching that first day-and-date movie, “Wonder Woman 1984,” was far outweighed by the “massive” subscription growth ultimately realized during 2021, Brady points out.

NBCUniversal’s Peacock experienced a similar bump in churn (up to 12%) in August 2021, as the Olympics ended, but still benefited from the subscriptions bump.

Netflix, which is so well-established and has such high saturation levels that it is treated like a utility by many consumers, normally has a low and markedly stable churn rate.

But even Netflix is subject to unexpected developments. After it debuted the controversial movie “Cuties” in September 2020, its churn jumped up to 4%, from its usual 2.4%.