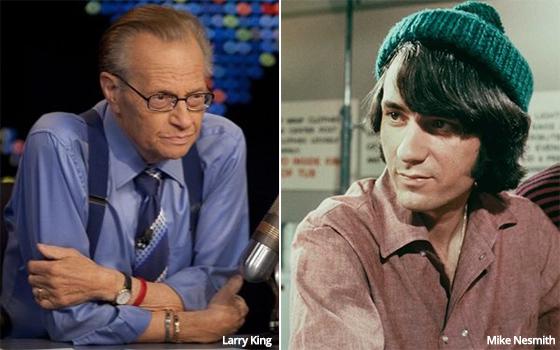 Larry King was a broadcasting original who knew everyone and interviewed them too -- from celebrities from all corners of show business to U.S. presidents.

He was a national talk show host for 37 years, first on radio on the old Mutual Broadcasting System and then on television on CNN.

His interview show, “Larry King Live,” was the anchor of CNN’s prime-time lineup at 9 p.m. weekdays -- and by all measures, he was the leading talk-show host in his era on cable news.

He wore trademark suspenders, spoke in a gravelly voice that defied description, married seven times and was famous for insisting that he never prepared for a single interview.

There will never be another like him, which is why he is the headliner of this year’s tribute to the TV greats who passed away in 2021.

Among them was Mike Nesmith, the Monkee in a wool hat whose death earlier this month gave Baby Boomers another reason to ponder the passage of time, for “The Monkees” was one of the touchstones of our 1960s childhoods.

Some of the year’s most notable TV deaths included director Michael Apted, long-time powerhouse behind the “Seven Up” TV series that allowed us to follow a group of English youngsters far into adulthood.

Many others earn special recognition here. Rush Limbaugh was a brash personality with natural abilities as a broadcaster who saw a niche on AM radio and then filled it.

Three others were actress Cicely Tyson (“The Autobiography of Miss Jane Pittman,” “Roots”); Cloris Leachman (“The Mary Tyler Moore Show”), one of the most accomplished actresses of her generation; and Hal Holbrook, a ubiquitous presence on TV for 62 years.

Also gone this year: “Today Show” weatherman Willard Scott, who became famous for his tributes to ordinary Americans on their 100th birthdays. He died this year at age 87.

This year, we said good-bye to comedian Jackie Mason (“The Simpsons”); Alan Kalter, announcer and comic foil on “Late Show With David Letterman”; and Charles Grodin, possessor of one of the most brilliant comic minds in the history of television.

George Segal was a movie great who was last seen on “The Goldbergs.” Larry McMurtry was the author of sprawling western epics such as “Lonesome Dove” that were adapted into unforgettable television events.

Barry Lewis was an architectural historian in New York who took New Yorkers on charming tours of the city on his local PBS show “Walking Tours.”

From the world of old-time television, we said good-bye to Gloria Henry, unforgettable TV mom on “Dennis the Menace”; child star Johnny Crawford (“The Rifleman”); and Betty Lynn, who played Thelma Lou, Barney Fife’s girlfriend on “The Andy Griffith Show.”

The ranks of TV’s unforgettable character actors are thinner now. This year we lost Jane Withers (Comet Cleanser’s Josephine the Plumber), Clarence Williams III, coolest member of “The Mod Squad”; Charlie Robinson and Markie Post, both seen on “Night Court”; and Michael K. Williams from “The Wire” and “Boardwalk Empire.”

Michael Constantine became famous for his starring roles in “My Big Fat Greek Wedding” and its sequels, but he was also part of one of the most storied TV series of the 1960s, “Room 222.”

Dustin Diamond will be forever remembered as the scene-stealing Screech in “Saved By the Bell.” Peter Scolari will be long remembered for his co-starring role with Tom Hanks in “Bosom Buddies” and later as a star of “Newhart.”

Norman Lloyd (“St. Elsewhere”) was the last surviving member of Orson Welles’ Mercury Theatre group of the 1930s. He died this year at 106.

John Gabriel was also a long-time character actor on television who is the answer to a trivia question: Who played the Professor in the unaired pilot for “Gilligan’s Island”? It was him.

Dean Stockwell was a child star best known for playing the title role in the 1948 movie “The Boy With Green Hair.” But later in life he took a “Quantum Leap” to small-screen fame.

And from the world of network news, we said good-bye to Roger Mudd and Lloyd Dobins.

Where would television be without its network execs and tireless producers? This year, we lost Herb Schlosser, one-time president of NBC; Jamie Tarses, former president of ABC Entertainment; and Nickolas Davatzes, creator of A&E and The History Channel.

Fred Ladd was a producer credited with bringing Japanese animated shows to North American television, including “Astro Boy” and “Gigantor.”

David H. DePatie was an animator whose partnership with another animator, Friz Freleng, produced “The Pink Panther” cartoon series and many others.

Here at the end of 2021, we say our final good-byes to sitcom director Jay Sandrich, publicist Bobby Zarem, and producers Cy Chermak (“CHiPs,” “Ironside,” “Kolchak: The Night Stalker”), Anne Beatts (“Square Pegs,” “A Different World”) and John Langley, creator of “Cops,” one of the longest-running shows in television history.

To all of them, the TV Blog says thank you, and farewell.

broadcasting, celebrity, movies, television
1 comment about "A King And A Monkee: The Legends We Lost In 2021".
Check to receive email when comments are posted.
Next story loading