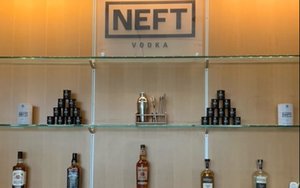 On Jan. 1, when Utah takes on Ohio State in the 108th annual college gridiron matchup, Neft will run an all-day “Neft Lounge” at the game’s Fan Fest, open to all ticket holders, and also be served up at stadium concessions, including tastings for VIP ticket holders at its own Neft Branded Bar.

In a busy year for Neft sports sponsorships, the brand in 2021 also teamed up with Andretti-Steinbrenner Racing for three Indy 500 races and with the Association of Volleyball Professionals for the Manhattan Beach Open, donating 30% of its sales during the latter event to the Downtown Women's Center in Los Angeles.

Neft, which calls itself “the first sipping vodka,” notes that it comes “in an “unbreakable barrel that keeps its vodka cold for up to six hours, making it the perfect accompaniment to sports, beach events and adventures of all kinds.”

Outside of sports, the brand recently announced the second year of its Emerging Film Talent International competition, in which short films must include “a barrel of Neft… in some capacity that is not a simple product placement” as well as embodying the brand’s “belief that humor can be found in everyday life, reflecting Neft's motto that ‘Life is a story. Make it a good one.”

With that in mind, we took another look at Neft’s major claim to marketing fame -- its graphically violent viral video sensation of 2013, “Bad Motherf***er,” aka “Insane Office Escape 2” -- and found no humor, but definitely a good story.