Misinformation's Just Another Word For Nothing Left To Lose 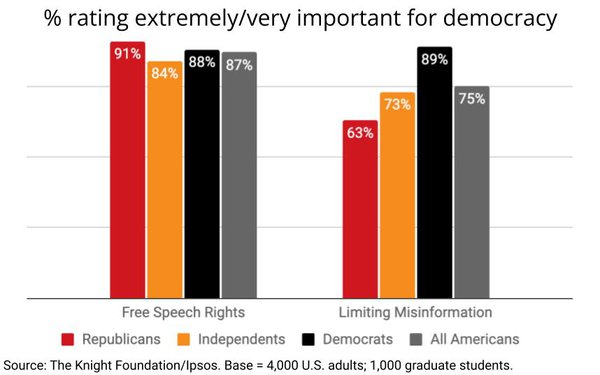 As someone who has spent most of my life working under the protection of the First Amendment, I've never been more torn about the tension between the right to free speech and the need to curtail misinformation than I have over the past half-dozen years. The truth is, it's always been a blurry line as well as a moving one, but for most of my career, it was a slow-moving one.

That's no longer the case, thanks to the ability of technology to accelerate and amplify bad information as quickly as the good kind.

A few weeks ago, I published what I believe was one of the most important "Red, White & Blogs" I've ever written -- the one correlating the decline of the world's population living in a democracy with the rise of it living with internet access. And there's the rub.
Whether it is disinformation about elections, scientific information helping people navigate a pandemic, or the wackiest new QAnon theory, the internet has enabled it to spread like no tomorrow, literally.
We can speculate on who is doing most of the spreading, but what we do know is there are some hostile actors, both foreign and domestic and digital media is enabling them.

The most ironic part of these attacks is that they've actually managed to divide the beliefs of Americans on the subjects of free speech vs. disinformation itself.

There has been anecdotal evidence of that from various studies over the past several years, but a new study from Ipsos puts some hard numbers around it.

The report, "Free Expression In American Post-2020," was published by The Knight Foundation and Ipsos (not so coincidentally) on January 6, and it finds a marked partisan divide among Americans on the tradeoffs of preserving free speech vs. limiting the spread of misinformation.

Specifically, it found that Americans overall put a higher importance on free speech vs. limiting misinformation, though Democrats index proportionately higher and Republicans lower in terms of the latter. Hmmm -- I wonder why?

If I were filling out that survey, I would rank both of them equally in terms of being extremely important to American democracy, although I think the bigger danger right now is misinformation, because it is clearly out of control and technological innovation continues to accelerate the ability of hostile actors to spread and amplify it.

Lastly, I find a breaking news story that the Republican National Committee is pulling out of future presidential debates, given that the party's members are such big proponents of free speech, but I imagine it's because they don't care as much about the spread of misinformation.

In a letter to the Commission on Presidential Debates, the RNC said it would ask all candidates seeking the party's nomination to pledge not to participate in the commission's debates.

The commission is a nonprofit corporation created jointly by the RNC and the Democratic National Committee in 1987 to sponsor and produce televised presidential debates leading up to an election.