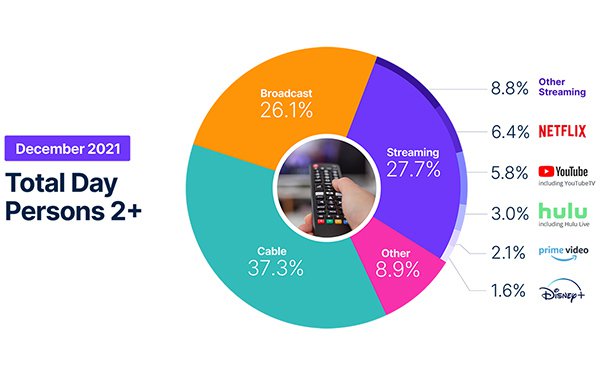 Although premium streaming usage continues to grow, analysts say growth rates are moderating — and some publicly traded streaming stocks have suffered this year.

This investor response comes after a strong pandemic two-year period where streaming-focused platforms and other at-home technology and entertainment companies witnessed strong subscriber and revenue gains.

On Friday, Guggenheim Securities downgraded Disney's profit growth for its direct-to-consumer and theme-park businesses. At the same time, it estimates Disney should boost content spending at the company by some $8 billion -- a positive sign long-term.

Other analysts warn that Netflix -- which witnessed strong over-delivered pandemic-era growth -- may face rougher comparisons in the near-term periods.

December streaming shows slightly topped the broadcast TV usage share of 26.1%, although it is still well behind cable TV's 37.3% share. The other category-- streaming through cable set-top boxes, DVD playback, unmeasured video-on-demand, and gaming -- was at an 8.9% share.

Looking at individual platforms in the streaming category for December, Netflix has a 6.4% share, followed by YouTube with 5.8%; Hulu at 3%; Amazon Prime Video at 2.1%; and Disney+ with 1.6%.