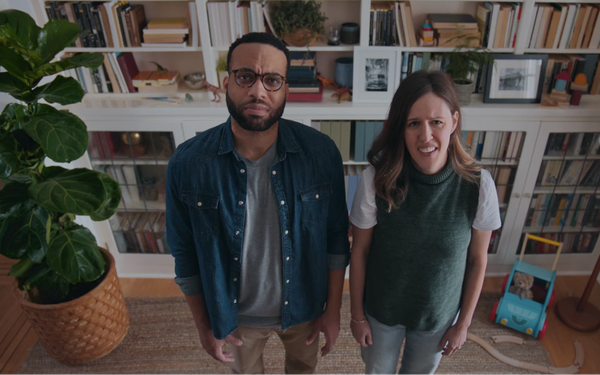 Pipette, a baby and mom skincare brand, is launching creative that offers an honest view of parenting.

A 30-second spot from BarrettSF follows harried parents in various confounding situations as they attempt to navigate everyday life, and question everything.

The effort debuted Jan. 10 on Connected TV and social media. Networks include Hulu, NBC, Spot On, CTV, and Peacock.

First launched in September 2019, Pipette is expanding its presence both online and in-store with placements at food, drug and mass retailers such as Target, Amazon, Walgreens and buybuyBaby.

Pipette's niche is babies with sensitive skin. After winning the account in October, Barrett aimed to produce a collection of ads that would increase brand awareness of the gentle products.

The aim was to show “real moments” parents experience on any given day, says Margaret Park, senior director, creative at Pipette.

“This age of social media-perfected parenting is dismissive to real struggles and is actually incredibly unkind,” Park says in a release. “Ultimately, our goal was to extend a bit of empathy to real parents by acknowledging the chaos of constant questions that come with the experience.”

Created by an all-female team—including the client team, agency team, director, and editor—the group sought to expand beyond motherhood and develop a campaign that all parents could relate to.

“We wanted to communicate the importance of clean and safe products without leaning into fear—after all, parents already have a million and a half worries every single day,” said Marisa Buss, group account director at BarrettSF.