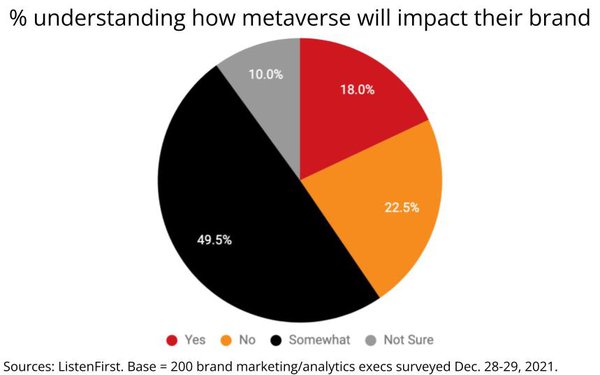 Only 18% of brand marketing and analytics executives surveyed in December say they understand the metaverse and how it will impact their brand, according to a survey fielded by social analytics firm ListenFirst.

The finding -- part of a social media marketing trends report released this week -- found that nearly half of the respondents "somewhat" understood it, while nearly a third either don't understand it at all or aren't sure what it means.

The study follows Facebook's rebranding as Meta and its push to accelerate its platforms as on-ramps to the metaverse, including an idealized utopian pitch by founder and CEO Mark Zuckerberg on how it will benefit consumers and brands.

Interestingly, the ListenFirst survey found Meta's Facebook unit also is the "least trusted" social media platform with 44.5% of respondents characterizing it that way, followed by TikTok (22.0%) and Reddit (12.5%).