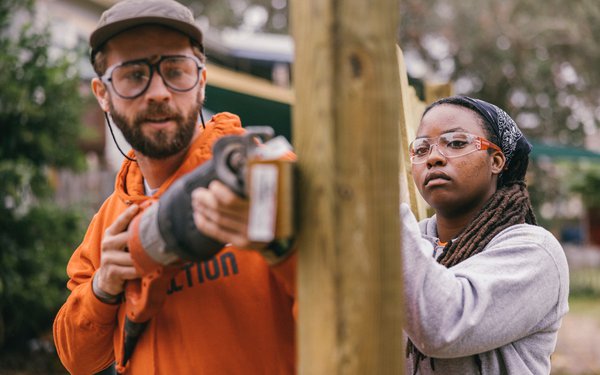 While just about every industry is facing critical labor shortages, the skilled trades­ -- especially construction workers, electricians, plumbers and welders -- are among the hardest hit. That was true even before the pandemic, but research from Wolverine, the work boot brand, finds that just 30% of high school kids say they have even considered a career in the trades. And 50% say they're not even familiar with those careers.

That's not just bad for the housing market. It's not great for work boot sales, either. So Wolverine, which has partnered with the nonprofit Uncommon Construction since 2014, is introducing a special-edition collection that will benefit high school students considering careers in the skilled trades.

The organization’s high-school-age apprentices even had input into the design of the boot, based on their experiences building houses in New Orleans.

"Our role is to make sure we're elevating the importance of the skilled trade industry," says Lauren King, director of brand marketing for Wolverine. "So we're constantly looking for new ways to both celebrate and encourage people. This effort is significant because it's geared specifically [toward] high school students. The country needs this next generation."

It’s not that today's teens are all college-bound. In fact, 72% say they think it's important to consider options to a four-year degree. But trades are woefully low on their list.

Wolverine's collaboration with Uncommon Construction includes educational speakers and an outreach campaign on TikTok and Instagram. Besides brand content, social influencers, including some apprentices, will post about their experiences. Paid media will further amplify messages for a high-school audience.

"We want to reach kids, of course," King tells Marketing Daily. "But we also need to connect with the people influencing those students, including parents, counselors and teachers. And we want to show them how meaningful a career in the trades can be."

She says the initiative touches on brand-building, too, and aims to connects with people more emotionally. "We not only have a very functional relationship with our consumer, but a lot of brands we compete with aren't talking about that holistic person wearing those work boots. We do -- and want to highlight people in these jobs to inspire others."

The new effort falls under the company's ongoing Project Bootstrap effort. A portion of the sale of each of the latest collections goes to its scholarship fund. Wolverine has raised more than $2 million in the last five years.

Other workwear brands also focus on the shortage of skilled laborers, including Carhartt, Red Wing and Duluth Trading Co.

Wolverine, based in Rockford, Michigan, also owns the Merrell footwear company, and has partnered with brands like Ram Trucks, Old Rip Van Winkle, Rawlings and Metallica.