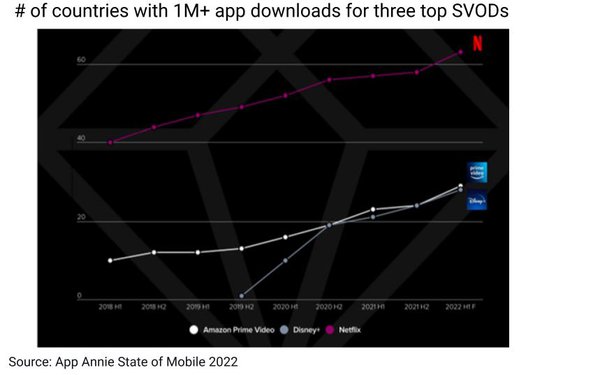 Two-year-old streaming service Disney+ has surpassed $2 billion in lifetime global consumer sales through app stores, according to a new analysis from App Annie.

Of the 35 total mobile apps and games that have reached the $2 billion threshold as the analysis’ Jan. 25 cutoff date, only nine —including the five video streamers — are non-game apps.

Disney+ was the No. 2 streaming app by global app store consumer spend in 2021, second only to YouTube, according to App Annie’s State of Mobile 2022 report.

Disney+’s footprint in terms of number of countries that have seen at least 1 million lifetime app downloads rivals that of Amazon Prime Video, despite having launched seven years later than Prime Video, App Annie points out. (See chart top of page.)

Disney+’s exclusive content contributed to download growth. For example, during the 30 days after its release of “Luca,” downloads rose 40% compared to the prior 30 days.

“Strong IP through the Walt Disney Company, Pixar and Marvel Studios, among others, coupled with timely releases, helps to encourage new subscribers and long-term retention to the service,” the analysis notes.