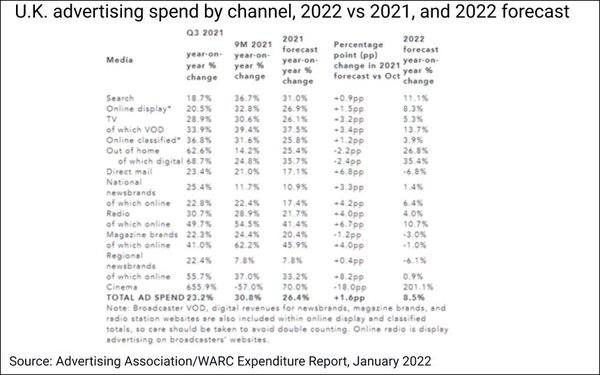 Advertising spend in the U.K. is now estimated to have spiked 26.4% in 2021, to reach £29.7 billion (U.S. $39.9 billion) — making it the market’s strongest year on record, according to the latest Advertising Association/WARC Expenditure Report.

WARC’s international data indicates that the U.K.’s 2021 growth (in U.S. dollars) was the largest of any major international ad market — including the United States (21.7%), France (23.6%) and China (23.8%) —and surpassed the global rate by more than 12 percentage points.

“A strong advertising market is a key indicator of the U.K. economy’s growth, with every £1 spent on advertising generating £6 GDP,” noted Stephen Woodford, chief executive of the Advertising Association.

For 2022, the revised forecast calls for total ad spend to rise 8.5% (up by 1 percentage point since the October forecast), to £32.2 billion — meaning that the U.K. market will have expanded by more than a third since 2020.

“While inflation is set to act as a headwind on both the consumer and media buyers alike in the coming months, we have little reason to believe that the UK’s ad market won’t achieve growth of 8.5% this year – well ahead of the average recorded during the decade preceding the outbreak,” commented James McDonald, Director of Data, Intelligence & Forecasting, WARC.

Search is projected to increase by 11.1%, online display 8.3%, and television 5.3%. Sectors especially hard-hit by the COVID pandemic, including cinema and out-of-home, are expected to see continued strong recovery.

The revised 2021 report reflects actual data for Q3 2021 showing ad spend rising 23.2% to £7.3 billion — three percentage points and £183m ahead of forecast, and the highest summer spend on record.

All media recorded double-digit growth in Q3 2021 (see summary top of page) following the previous year’s decline, as the summer period saw the return of key sporting moments such as the Euros, Olympics and Paralympics along with easing of Covid-19 restrictions.