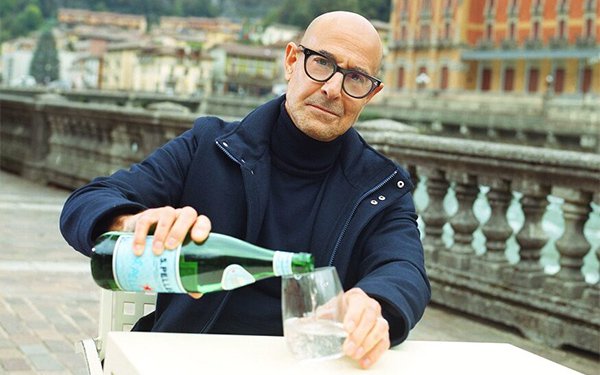 The campaign launched across S.Pellegrino’s digital and social platforms, on Tucci’s social channels and in earned media, debuting with a People magazine exclusive. Starting in May, the campaign will air on TV.

Shot at the source of S.Pellegrino, in the scenic Italian town of San Pellegrino Terme, each vignette captures a key mainstay of Italian life, such as the warmth of eating with family, with the tagline: “Enhance your moments.”

Ogilvy and Hogarth handled the creative and production. Both agencies are part of the WPP company.

“S.Pellegrino has long been a staple in my kitchen and at my dinner table, two places where so many treasured moments come to life,” Tucci said in a release.

The 100 limited-edition bottle carries his signature and includes a S.Pellegrino cutting board and a pair of stemless water glasses.

Fans will follow Tucci as he explores the village of San Pellegrino Terme in Bergamo, Italy, and discovers S.Pellegrino’s journey through the Italian Alps that gives this water its distinct taste.

Thomas Conquet, marketing director, S.Pellegrino, said the Tucci alliance will “highlight our Italian heritage and shared values. Like Stanley Tucci, S.Pellegrino shares a love for Italian culture and its virtues like community, friendship and joy. Together, we hope to encapsulate that spirit and inspire fans to savor every one of life’s perfect moments, no matter how big or small.”

S.Pellegrino is also a supporter of premier culinary programs, such as The James Beard Foundation, World's 50 Best Restaurants, Michelin Guide and The Culinary Institute of America.

Separately, NerdWallet, a personal-finance site and app, named Deutsch LA as its new lead creative agency in the U.S., Argonaut, which previously handled the account, did not defend. NerdWallet's ad expenses were $86.7 million for 2019 and $106.8 million, according to corporate filings. They were $71.3 million and $117.2 million for the six months ended June 30, 2020 and 2021.