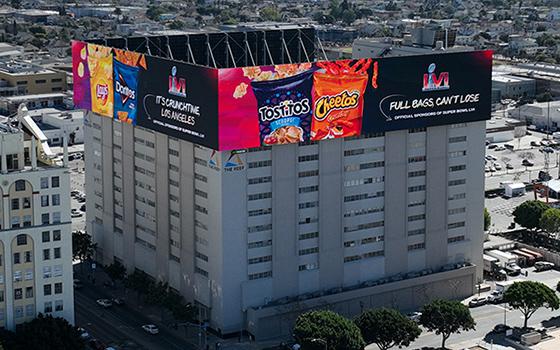 It’s something ingrained in us over the years. After the Super Bowl, we eagerly look for a breakdown of the big game’s best TV ads, gobbling up the rankings on USA Today and other sites, debating the spots on text strings and reading the postgame social media reactions.

But what about the best out of home Super Bowl ads? When the NFL’s premier event comes to town, many advertisers want to get in on the action in the city, too, which ignites with buzz over the game leading up to the event.

That excitement was even more notable this year because the Super Bowl took place in Los Angeles, one of the nation’s top two OOH markets, along with New York City. DASH TWO is headquartered in LA, and we can tell you from firsthand experience that we saw a lot of ads — though, it turned out, not as many as we expected thanks to the National Football League’s rather avaricious advertising standards.

Since 1969, the NFL has held a trademark for Super Bowl, and it protects that trademark zealously. Advertisers who are not official big game sponsors and use the term “Super Bowl” will receive cease-and-desist letters. That includes restaurants that advertise Super Bowl specials or even, in one famous case, a church that advertised a Super Bowl watch party.

So advertisers had to be cagey in referencing the Super Bowl if they lack a sponsorship deal in place with the league. Even so, we found lots of examples of brilliant creative around town that captured people’s attention and got them talking. 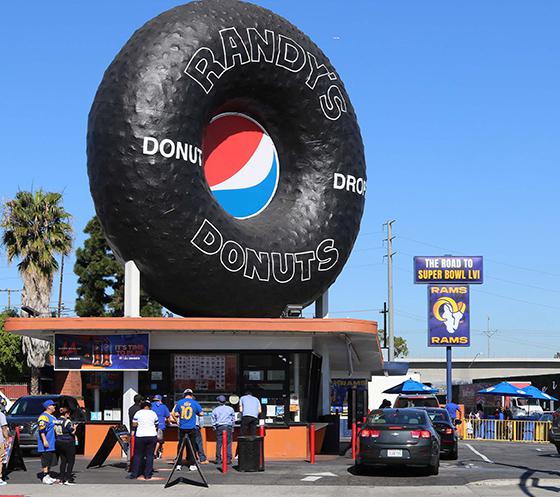 1. Pepsi Logo at Randy’s Donuts
Pepsi is sponsoring the Super Bowl halftime show once again, and if you landed in LA with no prior knowledge of Super Bowl ads, you might think the advertiser is the only company with a stake in the game. The distinctive Pepsi logo is on display everywhere, including at an Inglewood landmark, Randy’s Donuts. It’s known for the giant donut on top of the building, and right now that giant donut has the Pepsi logo in the middle. Simple. Direct. Genius.
Vendor: WOW Media
Agency: OMD
Location: Manchester and 405 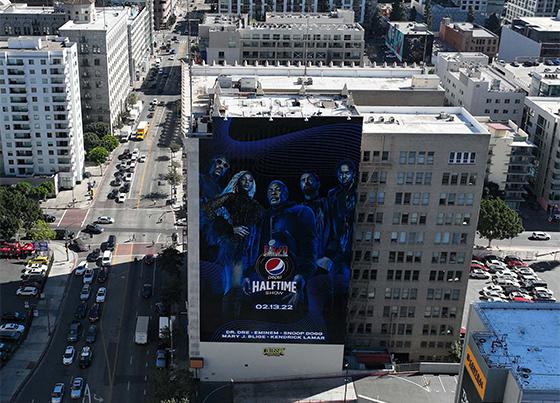 2. Halftime Pepsi Ad
Did we mention already how many Pepsi ads there are in LA? So very many. Another standout sits in downtown LA, a spectacular hand painted sign advertising the impressive halftime show sponsored by Pepsi. It includes the artists performing in the show as well as their names, and it grabs the eye from far away. With the blue-toned picture and absolutely huge presence, it’s a definite highlight of the city.
Vendor: Colossal Media
Agency: OMD
Location: Olympic & Figueroa, Downtown LA 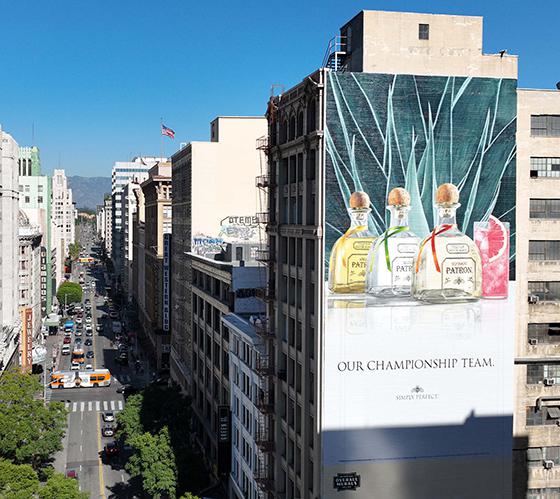 3. Patron
Patron delivers some of the most striking creative in a spectacular billboard in downtown LA. The image shows three different-colored bottles of the tequila, next to a pink drink that adds elegance to the picture. Below, it says, “Our Championship Team.” Since one of the teams in the Super Bowl, the Los Angeles Rams, is local, the ad takes on a new dimension. It’s a football ad and also a salute to hometown favorites.
Vendor: Overall Murals
Agency: Unnown
Location: Hill St., Downtown LA 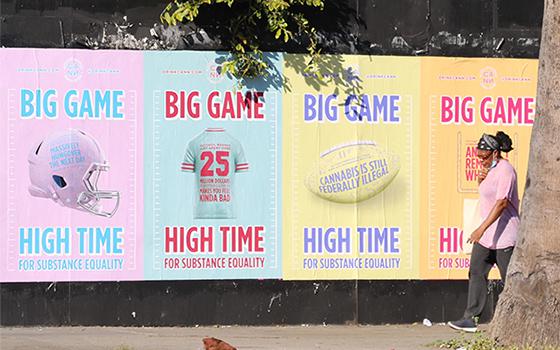 4. Cann
The NFL won’t accept cannabis advertising, and that has led cannabis companies to look for an end-around. A tremendous wild posting campaign around Los Angeles has successfully done that, with the posters mentioning the “big game” but avoiding any trademarked terms. The imagery, including a football, jersey and helmet, make it pretty clear what the tie to the game is, but the clever wording (emphasizing “big game” and “high time”) also drives home the point.
Vendor: Unknown
Agency: Unknown
Location: Wild posting around the city 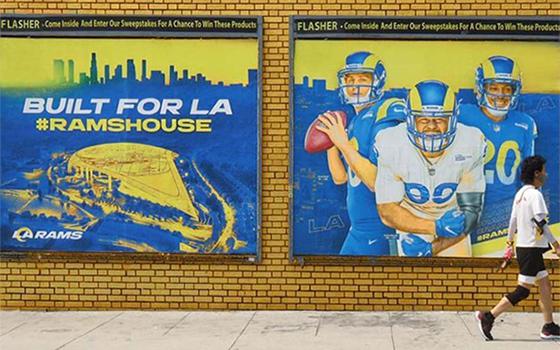 5. RAMS
Only three teams in NFL history have made the Super Bowl when their cities hosted, including last year’s Tampa Bay Buccaneers and the Rams this year. So no surprise you will find tributes like this one, lauding the hometown team for its run to the championship. The stylized artwork in Rams colors makes these ads stand out.
Vendor: Alchemy Media
Agency: Unknown
Location: Wild posting around the city 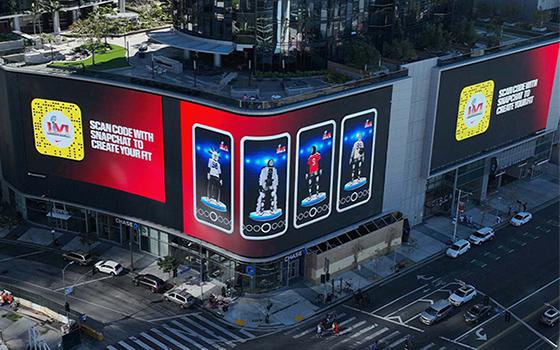 6. Snapchat
A digital spectacular seems appropriate for a social media company. Snapchat got into the game with this ad at LAX, a typical effort for the company. It has used augmented reality billboards before in Los Angeles to advertise.
Vendor: Kevani
Agency: Unknown
Location: Downtown Los Angeles 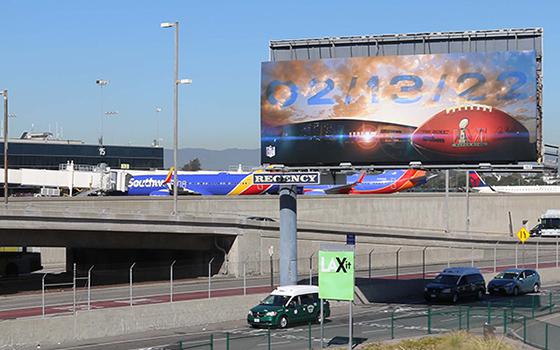 7. Super Bowl
The art on this billboard at LAX gets an A+. It’s subtle yet delivers the message perfectly, including the date of the game above an image with a football and the Vince Lombardi trophy. People coming and going from the airport think about the game every time they see the sign.
Vendor: Regency
Agency: Unknown
Location: LAX Terminal 1 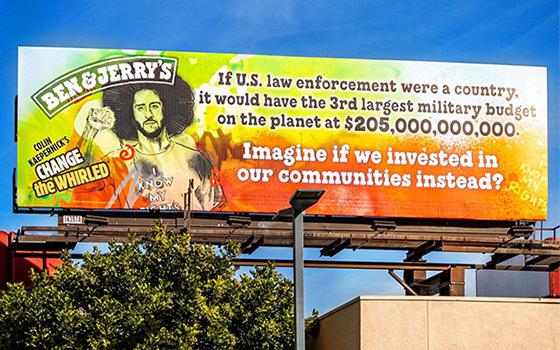 8. Ben & Jerry's
For the second straight year, Ben & Jerry’s bought out of home inventory in the Super Bowl city to advertise Change The Whirled, the ice cream flavor it created with former quarterback Colin Kaepernick. It’s a trolling situation. Kaepernick has been famously persona non grata in the NFL since beginning his national anthem protests in 2016. The boards continue Kaepernick’s advocacy for police reform, urging the city to rejigger policy budgets. The creative includes a portrait of the ex-QB and simple messaging that gets right to the heart of Kaepernick’s crusade.
Vendor: Clear Channel
Agency: Unknown
Location: Multiple Billboards around Los Angeles

9. Tostitos
Big-game snacks are the whole reason some people watch the Super Bowl. Tostitos plays on that with an eye-catching wrap around an LA building that is visible from far away. The eye-popping creative stands out in an area with little surrounding color.
Vendor: New Tradition
Agency: Unknown
Location: Downtown Los Angeles 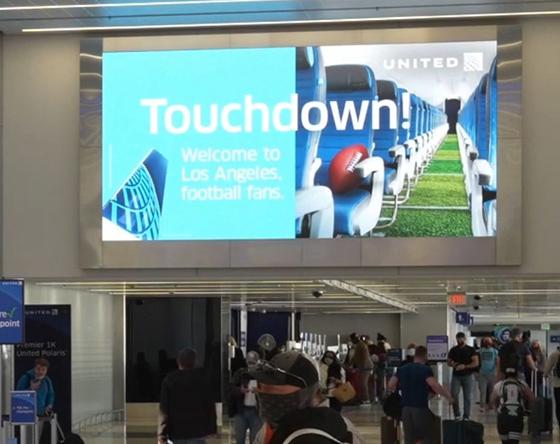 10. United Airlines
United Airlines scored a touchdown with its “Touchdown” campaign. Greeting travelers when they touch down from anywhere in the world, the digital signs deliver a low-key message about the big game without calling out the Super Bowl specifically. “Welcome to Los Angeles, football fans,” reads the messaging, with a picture of a football sitting in an airplane passenger seat. Avoiding mention of the big game also keeps the NFL trademark lawyers at bay.
Vendor: JC Decaux
Agency: Unknown
Location: LAX Terminal