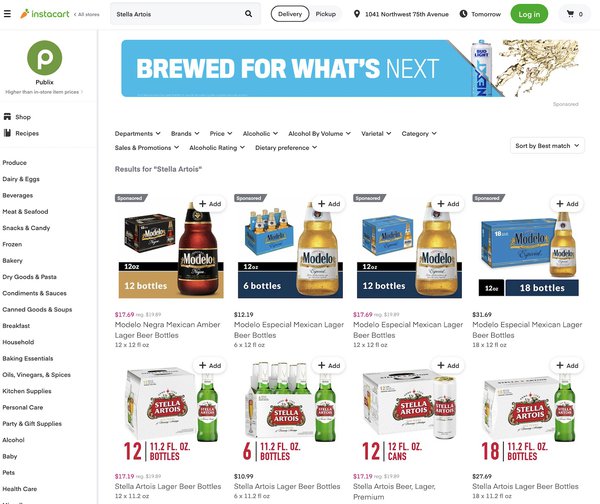 Image above: Modelo intercepts a search on Instacart for Stella Artois -- look who's on top!

That’s according to a study from ecommerce analytics company Profitero, which tracked ads on product pages and search results on  three retail websites from 6 p.m. to 10 p.m. Eastern time on Sunday.

Brands that did not advertise during the Super Bowl managed to beat competitors that did—by placing an ad on Super Bowl advertisers’ product pages, or buying ads based on search keywords related to those advertisers on Amazon, Instacart and Walmart.

Two key takeaways from the study are the need for more cohesion among marketer teams—some PepsiCo brands were actually bidding against each other—and a greater appreciation of the importance of media exposure on retail websites.

“If you’re advertising on TV and traditional media, but not thinking about how you show up at the point of conversion—which is a retailer site—you’re not going to get the most efficient ROI,” Profitero CMO Mike Black tells Marketing Daily. “And you’re going to leave a lot of room for competitors to steal all that good work you’re doing elsewhere.”

Nonetheless, even the MVPs had glitches.

While Gillette performed well on Amazon and Walmart, the product it advertised during the Super Bowl—GilletteLabs Razor With Exfoliating Bar—was not widely available from the grocery stores Profitero examined within Instacart.

“Gillette still showed up in search, but it was left promoting older and cheaper models,” according to the study.

Even though mega-spender PepsiCo competed against its own brands “on several occasions,” all of its brands tracked “were rated at the top of the pack, earning high marks for sponsored search results and product detail pages.”

Akin to the on-field activity, brands adjusted on the fly.

A case in point is Planters, which “started the game off strong by defending its search terms and product detail pages.”

However, Blue Diamond almonds “made adjustments at halftime and doubled its sponsorship spots” after a Planters ad ran.

“Blue Diamond attempted to intercept Planters 119 times. However, Planters fended off the charge and ended the night with 10% more ads than its competitor.”

“Maybe it’s not really the problem of any individual at Pringles,” says Black. “Maybe it’s ‘we need the budget.’ It’s a conversation that needs to happen. It’s an opportunity for the brand to say ‘we really need to invest more in this.’”