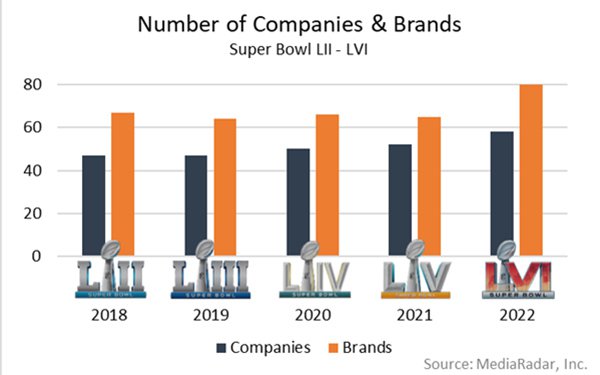 Brands like Amazon and Google have not consistently advertised every year, but have been big spenders when they do. During the past five years, beer has been the top product category buying Super Bowl ad placements.

The adult beverage has accounted for nearly 8% of the more than $1.7 billion spent on Super Bowl ad slots in the last five years, according to MediaRadar.

MediaRadar has published its 2022 Super Bowl ad-spending recap, which shows returning advertisers to the Super Bowl during the past five years, as well as top advertising categories.

NBC’s estimated advertising value reached more than $713 million from Sunday’s big game, up 45% from the last time NBC had the rights to air the sporting event, according to MediaRadar.

Although the cost of a 30-second spot has risen from nearly $4 billion in 2018 to nearly $7 billion for some spots in 2022, the Super Bowl saw a 23% increase in companies advertising, with 19% more brands compared to Super Bowl LII.

During the last five years, there has been an average 5% YoY growth in the number of both, and 89% of the companies running ads in 2018 during the game have advertised with NBCU Properties since.

The data also highlights the top spenders and advertisers that made an entry to the game this year.

The list of top spenders since 2018 during the Super Bowl include many big names. Anheuser-Busch InBev advertised six brands — Bud Light, Bud Light Seltzer, Budweiser, Michelob ULTRA, Michelob ULTRA Organic Seltzer and Stella Artois. They accounted for 7% of the total spend for the 2022 game.

About 47% of Super Bowl LVI companies advertised their brands on Peacock within the last three months. About 38% of companies returned from 2018, when NBC last held the broadcasting rights.

Anheuser-Busch has not only returned each year, but has been in the top five spenders every Super Bowl, spending nearly $240 million during the past five years.

Kellogg Company, Procter & Gamble, Verizon and Walt Disney have all advertised since 2018.

Twenty-four companies that are advertising during Super Bowl LVI are new this year, such as Carvana, Monday.com, and Salesforce.

Super Bowl LVI in 2022 also saw an increase in Media and Entertainment driven by companies in the gambling category like Caesar’s, up more than 1,000% YoY advertising their sportsbook, WynnBET Sportsbook and DraftKings’ Fantasy Sport League.

Still, 73% of technology companies that advertised in 2022 -- Cue Health, Google, Facebook, Greenlight and SalesForce -- did not advertise during the Super Bowl in 2018.

Although there were crypto companies advertising this year, only 27% of finance-related companies returned from the last NBC Super Bowl in 2018.

Half of the alcoholic beverage companies returned in 2022. Corona Extra, Casa Modelo, Constellation Brands, and Sam Adams, The Boston Beer Company stayed on the sidelines in 2022.

Missing out in terms of the top 15 spenders from last year were Jeep -- which pulled last year’s commercial after its star, Bruce Springsteen, was arrested for a DWI -- mortgage lender Guaranteed Rate, finance; Logitech, technology; and State Farm, finance.