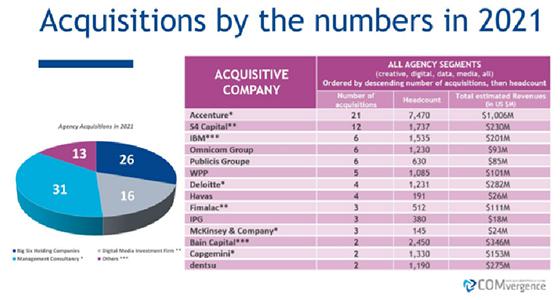 Marketing and communications agency acquisitions were up sharply in 2021 after declining for several years but still below the level reached five years ago, according to a new study from COMvergence.

The agency research firm said deals totaled 86 last year representing acquired revenues of more than $2.5 billion. By comparison, for 2020 the firm reported 47 M&A deals in the marcom space, representing estimated revenues of $826 million. In 2016 there were 120 transactions.

The new report, covering 2021 activity found that holding companies acquired 26 agencies, more than in the previous two years which saw depressed activity due to the pandemic. Management consultancies added 34 agencies to their rosters.

For the second consecutive year only one out of the top five deals was made by a “Big 6” holding company. Accenture was the most acquisitive group among the 20 buyers assessed in 2021, with 21 acquisitions, including four of the top-10 transactions.

Accenture acquisitions included 13 in the cloud platform space (including Imaginea) representing 18% of the total staff acquired and 48% of the cumulated revenues. The aggressive M&A activity in the cloud space followed the company’s formation of its Cloud First division in 2020.

The deal is part of the company’s plan to invest $3 billion over the next three years into the cloud technology sector.

COMvergence called out UK-based S4 Capital as a burgeoning “one to watch” holding group. In four years, S4 Capital acquired 26 companies in 14 different countries. All of those deals are focused on digital and data segments representing more than 2,600 acquired staff and an estimated total revenue of $375 million.