KFC Partners With TikTok To Fight Hunger Across The U.S. 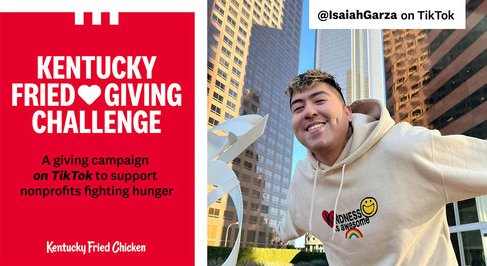 Kentucky Fried Chicken has partnered with TikTok creator and jewelry designer Isaiah Garza to develop a fund that will give away half a million dollars in cash grants to nonprofits fighting hunger across the United States.

According to a recent statement, KFC’s grant program was inspired by TikTok’s Creator Fund — which awards influencers with money, depending on their videos’ performance on the platform — and philanthropic creators like Garza.

Last January, one of Garza’s TikTok videos, which featured him helping a homeless woman find permanent housing, went viral. Since then, he has documented other acts of philanthropy and kindness on the short-form video platform.

“As a creator with a cause, I know what it is like to be homeless and hungry,” said Isaiah Garza in a recent statement. “I am excited to partner with KFC for the #KentuckyFriedGivingChallenge on a mission to inspire other TikTok creators to do amazing work in helping fight hunger and homelessness within their own communities.”

The #KentuckyFriedGivingChallenge is the first-ever grant program on TikTok that benefits nonprofits.

Between February 23 and March 4, KFC is asking TikTok users connected to a 501(c)(3) nonprofit to send in an original video of up to 30 seconds, showing how their organization helps its local community.