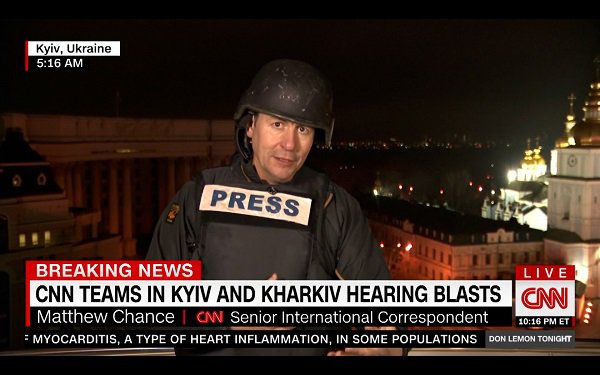 The war in Ukraine has the potential to impact the very future of the U.S. and the entire world in myriad ways.

And yet, given its urgency and importance, it feels under-covered by our television news media.

Or maybe the more-descriptive phrase is “under-emphasized,” although that is not entirely accurate either because the story is leading every newscast and it is certainly the top story on the cable news channels.

Still, it does not feel like that’s enough. This story needs more. It is so multifaceted that it cries out for long-form coverage, not only on cable but on the legacy broadcast networks with their vaunted news divisions.

Those networks still reach more Americans than cable news by far. They would be fulfilling a valuable service to the nation if they would clear their decks to cover the war.

It just so happens that this story, although it is located “over there,” is vitally important “over here.”

Most Americans would gladly forego their daily intake of “Ellen” or “Judge Judy” for continuous coverage of this extraordinary story.

But are networks and their stations in this day and age willing to consider preempting their daytime and prime-time lineups (not to mention foregoing the revenue they produce) for news, as in days of old?

At such times as these, Americans want to turn on their TVs and get the latest -- to see it and hear it.

When people are fighting and dying in Ukraine from an unprovoked attack, and a Russian leader is making threats to the entire world, Americans should be seeing war news, not “The Bachelor” or “American Idol.”

This story is just too unwieldy and fast-moving to be relegated to a package of stories -- no matter how professionally they are produced -- on the 6:30 news.

It is unfolding by the minute in many places all over the world, not least of which in Ukraine, where reporters (such as CNN’s Matthew Chance, pictured above) have been seen risking their lives in the beleaguered cities and battle zones.

It is playing out at the center of American power in Washington, across Europe, in dozens of capitals across the globe, and at the United Nations.

This story can be found on the border between Ukraine and Poland where refugees are flooding in and armaments and aid are flowing out.

It is the center of everybody’s attention on the streets and in the halls of government in all of the eastern European nations whose proximity to Russia makes them vulnerable to the same fate as their neighbor Ukraine.

For that matter, it is the center of attention here as well. It is the only thing anyone is talking about.

If they are not there already, reporters should be fanning out to any place where the story can be found.

Journalists should be reporting on, and bringing new clarity and meaning to, the reactions of government leaders and ordinary people from Eastern Europe to the United States and beyond.

The story of this invasion is one that concerns everyone. It is a dangerous story that has thrown much of the world into a state of tension, if not outright fear.

For the networks, whether broadcast or cable, a story like this one can be a game-changer.

The network that demonstrates a commitment above the rest to bringing this story home, staying with it, and reporting the facts without bias or opinion-making stands to score big points in the currency that matters most in the TV news business -- trust and reliability.