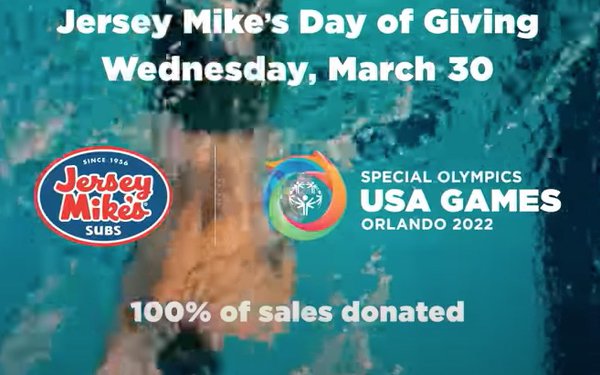 The chain will donate 100% of sales generated on March 30 from its more than 2,000 restaurants—along with consumer contributions throughout the month—as part of the company’s 12th annual Month of Giving effort.

As a result, Jersey Mike’s could raise in excess of $10 million.

A national television and social-media campaign from the Planet Propaganda agency has launched to drive awareness and customer visits for this year’s fund-raising drive.

The creative features five athletes—including Special Olympics track-and-field star and singer Destiny Gerety, who performs a rendition of “This Little Light Of Mine” in this spot and others.

“The spots capture the intimacy of these talented athletes as they train and shed light on the very cause Jersey Mike’s customers are supporting when they stop in and buy a sub,” the agency’s group creative director, Teddy Brown, said in a news release.

The ties between New Jersey-based Jersey Mike’s and the Special Olympics date to 1975, when founder and CEO Peter Cancro bought his first sub shop at the age of 17, according to Rich Hope, CMO of Jersey Mike’s Franchise Systems Inc.

“He had a couple of mentors in town who gave back to the community constantly. Cancro saw that and thought that was something he should do,” Hope tells Marketing Daily.

“When local Special Olympics were in the area, he decided to step up as a sponsor. So when the opportunity arose to be the presenting partner of the national games, it was something that brought him back to the beginning of the giving philosophy that he’s hung his hat on.”

The 2022 Special Olympics USA Games are scheduled for June 5-12 in Orlando, Florida at ESPN Wide World of Sports Complex within the Walt Disney World Resort.

Special Olympics is the world's largest sports organization for children and adults with intellectual and physical disabilities.