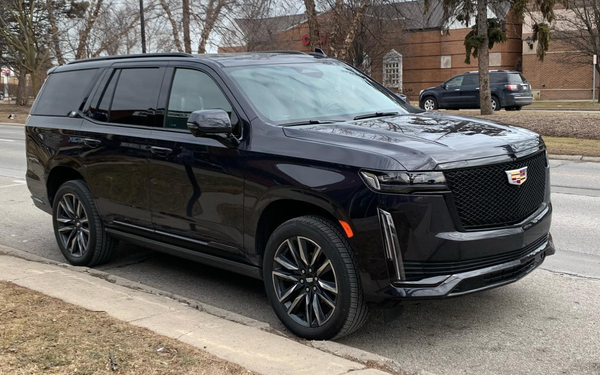 Automotive journalists are a critical group when reacting to the bells and whistles of new vehicle models and features.

While it’s got a few strikes against it, notably the shockingly low gas mileage, the Cadillac Escalade I drove this past week prompted reactions like no other vehicle has for a very long time. And they weren’t just admiring glances and questions from neighbors and friends, I had a literal “OMG” moment behind the wheel when automatic lane changing engaged the first time.

In a nutshell, here’s how it works: When a driver sets Super Cruise at a chosen speed, the vehicle will know when it’s coming up behind a slower-moving vehicle, look for an opening to pass, put on the turn signal, pass the slow vehicle and turn off the turn signal. Once it’s safe to get back over into the original lane, it also will do so, going through all of the above steps once again.

Pardon the cliche, but it’s a game changer. While lane keeping and adaptive cruise take a lot of stress out of driving, this takes it up a huge notch. It did have some difficulty engaging when I drove it in the rain and the highway lines were not clearly marked. But I look at that as a good thing — the vehicle is smart enough to know when a human driver needs to stay in control.

The last time I drove a vehicle with Super Cruise was during a media program introducing the Chevrolet Bolt EV.  I only got to drive it for a few hours, and the semi-autonomous feature didn’t seen a whole lot different than when I first drove a Cadillac CT6 that was equipped with it in 2018.

That was a memorable vehicle — I literally did not want to give it back. I have since been waiting patiently while General Motors rolls out the Super Cruise option to other divisions and models. Currently, the only non-Cadillacs to offer it are the Bolt, the GMC Hummer EV, and the Chevrolet Silverado and GMC Sierra pickup trucks.

Getting consumers comfortable with the idea of semi-autonomous technology has been a challenge for all  of the automakers. Many buyers are still reluctant to hand over control, and will not spring for the Super Cruise upgrade (which was $2,500 extra on the Escalade) even when it’s available.

That’s why Cadillac filmed a group of celebrities having their “aha” moment with Super Cruise. The videos were posted widely on social media. The General Motors luxury brand projects that the effort has  reached upwards of 167 million Instagram users and 48 million Twitter users, based on the collective number of followers of all the celebrities, who include actress and director Elizabeth Banks.

“It made the Super Cruise moment so relatable, and it has given people a reason to dig in and understand the tech — which really stands out,” Dias tells DriveTime. “It's amazing how quickly you go from skeptical to confident when you are using it.”

The vehicle is not priced for the masses. The 2022 Escalade 4WD Sport Platinum version that I test drove  will set you back almost $114,000. Drivers must be prepared to continue to shell out big money for the premium gas it requires (currently around $4.50 a gallon in Detroit) since the vehicle gets a low 14 mpg city, 19 mpg highway for a combines 16 mpg.

The demographic interested in the vehicle isn’t likely to care too much about gas prices or mileage. It has Spike Lee-worthy cache. You really can buy coolness; the way the Escalade made this longtime automotive journalist feel is clear proof.